“100%” follows Edelman’s underdog journey from being an undersized college quarterback who was drafted with the 232nd round pick in the 2009 NFL Draft, to becoming one of the most productive receivers in post-season history.

Also Read: Super Bowl LIII MVP Julian Edelman on the 'Ups and Downs, Ebbs and Flows of the Season'

The three-time Super Bowl champion’s career was stalled during a preseason game in 2017 when he tore his ACL and was placed on injured reserve for the entire season. He was then suspended for the first four games of the 2018 season due to a violation of the policy against using performance-enhancing drugs and went on to lead the Patriots to their sixth championship over the Los Angeles Rams in 2019.

“If you would have told me when I got hurt two years ago that ‘100%’ would be the result, I wouldn’t have believed you,” Edelman said in a statement. “Showtime has been amazing. It turns out making movies is a lot of fun.”

“Much like Jules’ career, ‘100%’ probably should have never happened, but Showtime shared our vision, and empowered us creatively to make something we hope is unlike anything you’ve seen before,” Assaf Swissa, Edelman’s business partner and the film’s executive producer, added.

According to the official logline from Showtime, when injury and controversy threatened Julian Edelman’s NFL career, he returned to his father, an auto mechanic, to fix what was broken. “100%” is an intimate behind the scenes look at the three-time Super Bowl Champion during a critical juncture in his life. After a dramatic victory in Super Bowl 51, Edelman suffered a devastating knee injury that forced him to miss the entirety of the 2017 season.

The film joins Edelman as he attempts to overcome the challenge of a season-ending surgery and PED suspension all while exposing the unorthodox origins that built him into one of the NFL’s most affable stars. “100%: Julian Edelman” enters into Edelman’s inner circle of family, friends and fellow football players while traversing the complex relationship between a father and a son who sacrifice everything to make it to the NFL. Viewers come to understand what drives the undersized former junior college quarterback, and why you do not bet against Julian Edelman.

“While Julian Edelman’s journey to Super Bowl MVP is acutely unique, sports fans everywhere will relate to his determination and his reliance on an inner circle of family and friends to overcome seemingly insurmountable odds,” Stephen Espinoza, president, sports and event programming, Showtime Networks Inc, said. “The access and timeliness of this project are the hallmarks of Showtime Sports unscripted programming. We are proud to deliver the life story of one of America’s most popular athletes amidst a career-defining moment.”

Written by Swissa and Director Kyler Schelling, “100%: Julian Edelman” is the first feature produced by Swissa and Edelman. It is the latest in a series of unscripted programming from Showtime Sports Documentary Films that spotlights contemporary subject matter. Additional titles in the lineup include the 2017 Sports Emmy Award-winning “Disgraced,” multi-part series “Shut Up and Dribble” and “Quiet Storm: The Ron Artest Story.”

See the film’s official poster below. 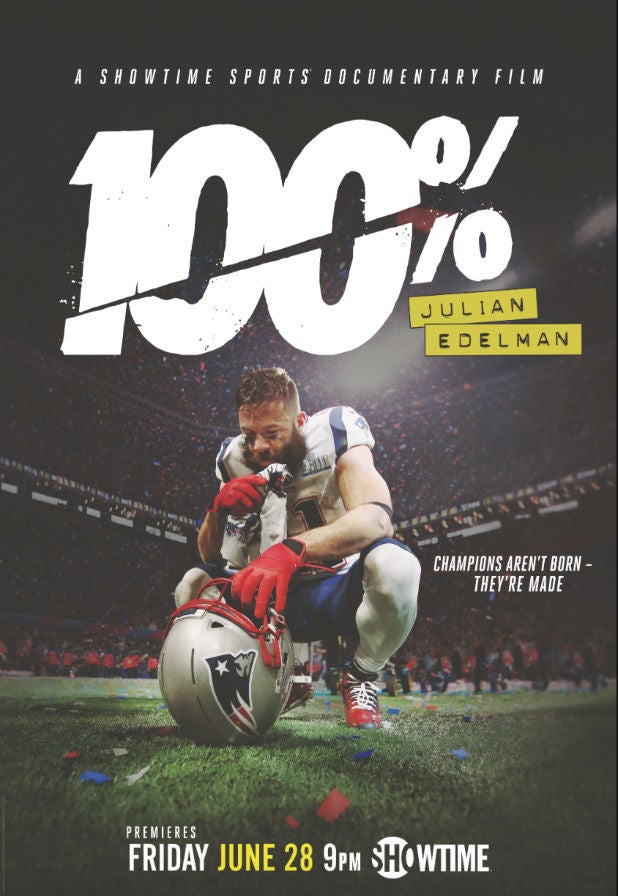