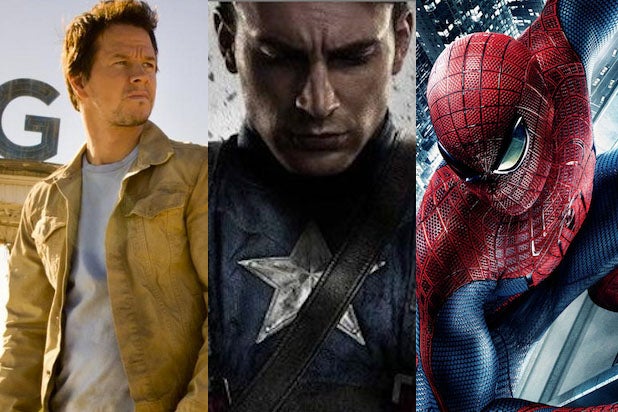 Disney paid big bucks to advertise three movies at last year’s Super Bowl, promoting “Iron Man 3,” “Oz the Great and Powerful” and “Lone Ranger” during the most watched television event of the year. “Lone Ranger” didn’t pan out at the box office the way Disney hoped, but that isn’t scaring the studio from dipping into its wallet again this year.

The studio will once again tease a trio of movies during breaks in the gridiron action between the Denver Broncos and Seattle Seahawks. Nine movies will get a marketing push during the game, with Paramount, Lionsgate, Universal and Sony joining Disney in the marketing fray for movies ranging from “Muppets Most Wanted” to biblical “Noah.”

Two major studios are skipping the game altogether. Warner Bros. will release its share of blockbusters this year – as it always does – but none of them gets a super bowl spot. No “Godzilla,” no Tom Cruise in “Edge of Tomorrow,” no Channing Tatum in “Jupiter Ascending” and no Johnny Depp in ‘Transcedence.” The studio prefers playing in the championship games, when their movies get more attention.

Fox is skipping Sunday as well. Its biggest movies this spring and summer are all sequels, some supernatural (“Dawn of the Planet of the Apes” and “X-Men: Days of Future Past”), some animated (“Rio 2,” “How to Train Your Dragon 2). Fox happens to be broadcasting this Super Bowl, so this one is a bit of a mystery.

Almost every trailer or ad playing Sunday is for a movie aimed at men, and most of them are sequels, reboots or adaptations of some kind.

Here’s a breakdown of what you’ll see:

With no “Fast & Furious,” Disney and DreamWorks hope to lure car with this cinematic take on the Electronic Arts video game franchise. It stars “Breaking Bad” star Aaron Paul, whose cultural profile has never been higher.

Disney is so confident this will be a hit it has already hired the movie’s director, the Russo brothers, to make the third film in the series. A Super Bowl plug can only help.

Kermit and the gang will not be appearing in a traditional trailer or teaser. They will team with actor Terry Crew to promote the new Toyota Highlander. If the ad is half as good as the Muppets ad during the Golden Globes, it could steal the show.

Darren Aronofsky’s biblical epic will screen after the national anthem and before kick-off. That should maximize exposure for a movie that is the first of many opening this year to draw inspiration from the bible.

Paramount’s summer depends on Michael Bay. He produced “Teenage Mutant Ninja Turtles,” reuniting with Megan Fox, and directed “Age of Extinction,” the fourth in the successful “Transformers” franchise. After the mixed performance of “Pain & Gain,” Paramount is glad Bay is back to making cars, autobots and deceptacons explode.

Sony is going to have a busy February with “Monuments Men,” “About Last Night” and “Pompeii,” but it has put the bulk of its marketing muscle behind “Robocop,” the reboot of the 25-year-old franchise.

As with most of the superhero movies that have Super Bowl spots, Sony has little doubt its latest installment in the Spider-Man franchise will be a hit.  In a summer with fewer big movies than usual, Sony may even have the biggest hit of all.

Universal’s summer has a hole in it after it pushed the release of “Fast & Furious 7” to next year, but “Neighbors” is one of those comedies with breakout potential. Directed by “Muppets” filmmakers Nick Stoller, it stars Zac Efron, whose “That Awkward Moment” will win the box office this weekend, and Seth Rogen, fresh off the success of “This Is the End.” The difficulty lies in standing out on a day littered with advertisments trying to be funny.

Advertising a movie about the NFL draft during the Super Bowl? Easiest choice on the board.