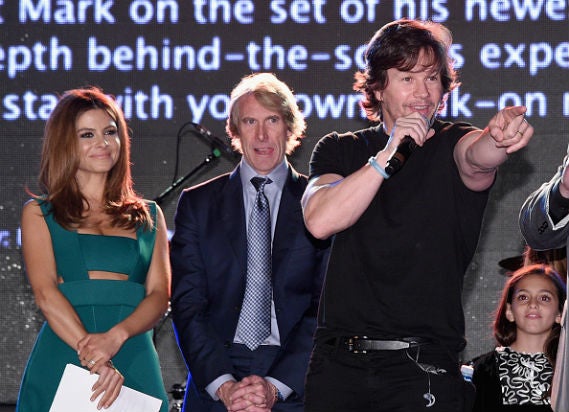 TheWrap’s Party Report will be updating throughout the big weekend.

Just a six hour drive or an 45-minute flight from Los Angeles, Hollywood’s biggest names are joining stars of the sports industry this week to celebrate Super Bowl XLIX in Phoenix, Arizona.

As usual, the celebration was in full force long before the New England Patriots and Seattle Seahawks took to the field at the University of Phoenix Stadium in Glendale, Arizona, on Sunday.

After braving the cold and wind last year for the 2014 Super Bowl at MetLife Stadium in East Rutherford, New Jersey, the desert location was a welcome relief for east coasters escaping winter storm

Most of the action is focused in downtown Phoenix and Scottsdale, where ESPN has taken over Scottsdale Fashion Square and The McCormick Hotel since Monday, airing live shows open to the public including “SportsCenter,” “Mike & Mike” and “SVP & Russillo.”

NBCUniversal, host network of the Super Bowl, which will air Sunday, Feb. 1 at 3.30 p.m. PT/6.30 p.m. ET, also had much of its high-profile programs originating from Phoenix during the week– “Today,” “Access Hollywood” and E!’s “Fashion Police” on all on the scene.

Guests got to meet the real stars of the weekend — the beautiful Clydesdales made famous by Budweiser ads — and enjoy food by James Beard Award winner Chef Vincent Guerithault, Patron Tequila Sunrises and drinks from Southern Wine & Spirits at the home of Matt and Erika Williams, Paradise Valley.

Diehard Patriots fan Menounos earlier in the day told TheWrap this was not her first trip to the big game. “I’ve been to almo

Fellow New Englander McMahon is just as loyal to her team, telling the TheWrap: “I am thrilled they made it, I have been a fan all my life and havkes inappropriate comments and that is exactly what he is going to do when he kicks the Seahawks butts.”

As usual, Maxim came out with all engines firing as they hosted an over-the-top bash an airport hangar in Scottsdale. Guests including Kellan Lutz, Ian Ziering and AnnaLynne McCord listened to Ludacris performing onstage, amidst a backdrw-colored Dodge Vipers, private jets and helicopters. Despite the chilly weather, the best part of the party was a mini drag racetrack that allowed guests to really tap into their need for speed! All that adrenalin pumping was fueled by a Steak ‘n Shake food truck, Johnnie Walker and Dos Equis.

Over in Scottsdale at the Rolling Stone LIVE Presented By Miller Lite party at The Venue in Scottsdale, the vibe was full on ’80s rock as girls in leather and lace swung from the ceiling and one even strutted around with a python. yler brought back the real spirit of the era after Charli XCX and DJ Cassidy warmed up the crowd. The bash marked the first time Rolling Stone had partnered with Talent Resources Sports, a full-service sports marketing and experiential events agency. The eclectic guest list uded “Game of Thrones” author George R.R. Martin, Ryan Cabrera, Aaron Paul and ESPN’s Matthew Berry.

Hollywood hot spot Bootsy Bellows took over the W Hotel in Scottsdale on Saturday for what they dubbed “a Pop Up” hosted by Drake. While downstairs was manic, the huge rooftop overlooking the city gave guests plenty of space to sprawl out as they listened to reality star Brody Jenner and William  Lifestyle man the sound system. Mark Saling, David Arquette and the WWE’s Bella Twins were all at the bash, with Arquette bizarrely getting opting to talk to Drake through a hand puppet.

After dark, the Worldwide Leader in Sport hosted it’s annual “ESPN the Party – Arizona” at Scottsdale’s Westworld Friday inside a 117,000 square foot space that was as dramatic as the desert landscape outside. Rock wall formations and projections of sunsets left no doubt in guests’ minds as to where they were, while a luxury Mercedes appeared to be driving right out of the wall.

“Twilight” actor Kellan Lutz snapped a selfie on the red carpet, while Nick Lachey was more interested in talking about being a father than football. Former college stars-turned-ESPN commentators Tim Tebow and Jesse Palmer gave their predictions for the big game, as Super Bowl champion QB Kurt Warner shared his own memories of playing in Arizona with TheWrap and why taking to the field in that stadium “was an experience like no other.” Among the thousands of glamorous and athletic guests were model Erin Heatherton, Aaron Paul, Reggie Bush, Colin Kaepernick, Rick Fox and ESPN hosevy and Tony Kornheiser.

Playboy’s annual party was at the W Scottsdale this year, with Nelly performing as 24 scantily clad Playmates in bunny costumes delighted partygoers. VIP guests were ushered upstairs through the W lobby to the exclusive rooftop bash hosted by the two-time Grammy award winner. Chris Evans, Nick Cannon, Jamie Foxx, Warren Moon and “Real Housewives” star Gretchen Rossi were among those getting in on the bunny action at the packednt partying with Playboy Playmates including “The Wedding Ringer” actress Nikki Leigh.

Outside, the normally-civilized streets of Scottsdale were in full party mode and resembled Bourbon Street during Mardi Gras as partiers wearing beads, team jerseys  –omedian in a deflated football costume — stumbled around.

Coachella staple Neon Carnival moved to a new desert location as the Don Julio and 1OAK Present Neon Carnival landed in Phoenix. Philadelphia Eagles QB Mark Sanchez went on a wild ride on the Desert Storm roller coaster, and actor Chris Evans added another big bash to his belt as he rolled up near the end and rapped along to Mystikal while DJ Ruckus spun.

DirecTV began its extravaganza on Wednesday night (running through Friday) at the Pendergast Family Farm in Glendale opposite the football stadium. The multi-stage DirecTV Super Fan Festival and StubHub Chalet features a concert(from 5 p.m. to 9 p.m.), opening with Zac Brown Band and performances by Thomas Rhett, Sam Hunt, and The Cadillac Three; followed by Calvin Harris (above) on Thursday and Imagine Dragons and Snoop Dogg on Friday.

Australian DJ Brooke Evers also got a taste of Super Boat the Bud Light House of Wh, showing American music fans why she’s famous Down Under for her skills on the decks as well on TV in “I’m a Celebrity, Get Me Out of Here,” and reality show “The Stafford Brothers.”

Meanwhile Arizona Cardinals’ Patrick Peterson proved he was better at video game football as he is on the field and was crowned the Madden Bowl XXI champion. Other famous faces going head to head in Madden NFL 25 on Xbox One and watching Nelly and Florida Georgia Line perform were Chris Evans, Marshawn Lynch and Denver Broncos player Wes Welker.

DirecTV Super Fan Tailgate -- John Legend and Chrissy Teigen got amped up for the game, and his performance, with DirecTV.