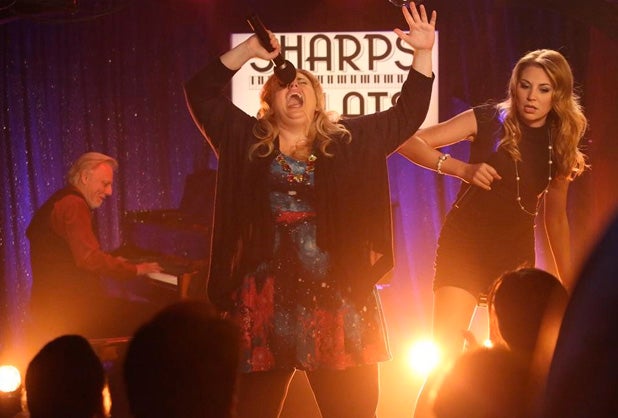 I can’t decide what’s more discouraging: that promising Australian comedienne Rebel Wilson stars in the desperately unfunny “Super Fun Night,” or that ABC ditched the pilot she wrote in favor of one credited to a sitcom pro.

Either way, it’s a disappointing start for a show built around an appealing talent.

Wilson stars as Kimmie Boubier, a bubbly lawyer with a peculiar case of arrested development. Supposedly competent enough at her job to have gotten a big promotion several floors up, Kimmie acts like a teenage girl in the office and around her nerdy childhood chums, Helen-Alice (Liza Lapira) and Marika (Lauren Ash).

These gals, also supposedly leading adult lives, are presented as so naive and unworldly that they don’t know what a Long Island Ice Tea is (now there’s an unusual misunderstanding) and consider a piano jumpsuit to be trendy.

The series opens with Kimmie confessing her crush on the boss’s son Richard (Kevin Bishop) in her “first ever video diary” before putting her mouth guard in her mouth.

A leggy colleague wants to keep them apart, and crashes the party when Kimmie and pals head to a piano bar on their weekly Friday night outing with Richard in tow.

This scene gives Wilson the chance to show off her pipes and remind fans of her star turn in “Pitch Perfect” with a lusty rendition of “Anything for Love.”

It is only then, well into the episode, that “Super Fun Night” really starts to come alive. Wilson drops the dopey persona and really performs. And there are actually a few unexpected beats in the scene, before a light message about winners and losers is delivered.

Those moments are enough to suggest “Super Fun Night” isn’t completely a lost cause.

Here are five more things you should know about “Super Fun Night.”

1. The show does not shy away from fat jokes.
Kimmie is constantly referring to her ample figure. She scampers around the office looking for jelly donuts, orders consolation pizzas, and wrestles with Spanx on more than one occasion. The jokes are fine. Her clothing getting ripped off to reveal the Spanx? Not so amusing.

3. “Bridesmaids” co-star Matt Lucas makes a brief appearance.
He plays one of Kimmie’s old coworkers from the lower floor.

4. The show also makes a few ethnic jokes.
Most notably: Marika comments, “That drunk little Asian is right” about their pal Helen-Alice.

5. Bob Saget is a guest star in an upcoming episode about the 10th anniversary of their disastrous prom.
Jacki Weaver has also signed on for a guest starring role.