I come to praise Guy Ritchie’s eminently entertaining “Sherlock Holmes,” not to bury it.

Also to speak in favor of retooling the past for the present.

As our culture grows up less and less educated in the classics and increasingly tutored in such contemporary skills as Excel and free downloading, it’s the only chance we’ve got of keeping the flame of immortality. And in the hyperbole that is filmmaker Ritchie’s lock, stock and trade, we should see good things. 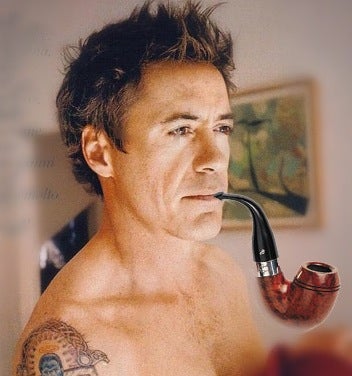 That’s why we should enjoy — rather than be mortally outraged by — the depiction of Holmes as an acrobat, kung fu master, boxing genius, silent film comedian and verbal quipster who could render Cary Grant into jealous silence.

And besides, even though his movie seems to be an over-the-top, Batman-esque take on Sir Arthur Conan Doyle’s four novels and 56 short stories, many of the details in the movie can be found in the source material.

No, the literary Sherlock Homes — played most winningly in the movie by Robert Downey, Jr. — did not experiment with a crude, early prototype of the gun silencer, as he fired holes into his apartment wall. But the literary Holmes indeed fired holes into his apartment wall at 221B Baker Street to form the initials VR (Victoria Regina), to commemorate his queen’s coronation. There’s a little bit of validity, and willfully outrageous expansion everywhere.

No, there was no Lord Blackwood in the Scottish-born Doyle’s brilliant works, but this creation of a dark lord who dabbles in the occult fits entirely with our times. It’s not enough for villains to get up to superficially dastardly mischief. They must take evil to its deepest, darkest extreme.

And it doesn’t take a lifetime of Bond movies for us all to know that the future of the world must truly be in jeopardy, or the kids won’t come see the movie. Hollywood has always understood that movies must be client-centered. Audience uber alles.

It is great fun to watch the movie and not just because Ritchie and his writers — Michael Robert Johnson, Anthony Peckham, Simon Kinberg and Lionel Wigram — have cannily combined classic and contemporary. But because they understand what makes a character so compelling in an era when the outlandish, the stupendous and the apocalyptic is the barest minimum we expect from a movie experience.

Deep down, what we want in our hero is what I call mastery of the moment. That is, we love our hero — or heroine — to think on his feet.

And in “Sherlock Holmes,” Downey’s Holmes is a forensic genius of life, a master of everything available to the rational mind. He’s the Tweedy, late 19th century version of Leonardo Da Vinci, who was versed in painting, architecture, geometry, mechanics, municipal construction and human anatomy. Who made the first prototype of the submarine and tank. Who designed flying machines.

Oh, and did we mention he painted the friggin’ Mona Lisa?

What we love about Holmes and Leonardo, is also what we love about all those “CSI” TV shows — that ability to use the known sciences in the series of fast moving, seat of the pants moments called life. Ritchie, a sort of idiot savant genius of cinema, understands this instinctively.

Early in the movie, Holmes finds himself in a bare-knuckle fist fight — by choice. Facing a thug — and how Ritchie loves his pug-ugly thugs as we have seen in “Lock, Stock and Two Smoking Barrels” and “Snatch” — we see Holmes working out in excruciating detail how he’s going to reduce this man to a quivering wreck.

We watch his mental visualization of what he’s going to do in a sort of slo/mo and stop-motion preview. We see what moves he’s going to make in the most efficient manner, as well as the body parts he’s going to hit and exactly what bones he’ll break. All this accompanied by Holmes’ running commentary.

Then we cut back to the present and Wham! Bam! Slam! We watch the whole maneuver in real — actually somewhat sped up — time. It’s over in a moment. The big guy is on the ground. And the onlookers, who have clearly bet on Holmes to get his butt kicked, watch in stunned silence.

Master of the moment.

He doesn’t just do it in the boxing ring. He can tell everything about someone in a few glances. When Dr. Watson’s fiancée (Kelly Reilly) invites Holmes to give his forensic reading of her, he does so all too tellingly, noting the mark on her ring finger left by a former suitor who didn’t work out.

The result: a glass of wine thrown in his face. But to us it’s a red badge of honor. The man’s a detective genius and how we wish we had those powers of observation.

In life, we are constantly beset by forces bigger than us, whether it’s our boss, our economic situation, a bullying family member or just life in general. And guess what: More often than not, we lose. In fact, we lose every day. So when we watch a character who turns the usual losing scenario into a winning one (give or take a glass of wine in the face), we watch with hypnotic, almost jealous adulation.

More than the CGI effects which are the weakest element in the movie (for being so commonplace), we admire Holmes’ ability to be the master of any, and every, moment. In the end, that’s what being a superhero’s really all about.

And Holmes, who uses reasoning to overcome almost everything, gives us hope. We could do that, too, if we just paid attention to the right details of life. And that’s something to take home.