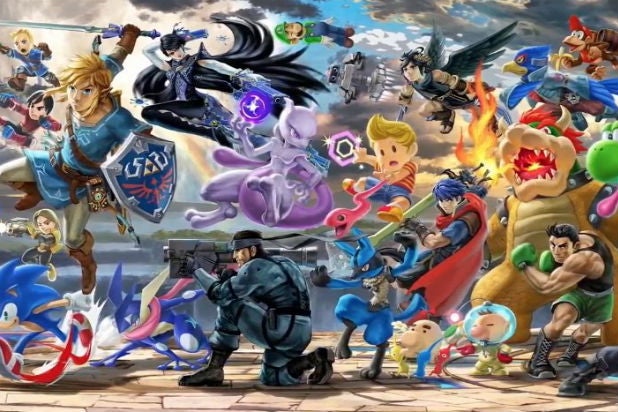 Nintendo kicked off the first official day of the 2018 Electronic Entertainment Expo (E3) with the announcement of a new entry in the “Super Smash Bros.” game series, “Super Smash Bros. Ultimate.” As is often the case with Nintendo stuff, fans on Twitter lost it, both in excitement and in the volume of jokes.

One of Nintendo’s weirder franchises, “Super Smash Bros.” is a fighting game featuring lots and lots of the video game company’s best-loved characters — like Mario, Luigi, Donkey Kong, Link from “The Legend of Zelda” and a mess of Pokemon — think “Street Fighter,” but with loveable mascots wailing on each other.

Over the years, the series has expanded beyond the most familiar Nintendo icons to include deep cuts like characters from “Ice Climber” (remember that one, fellow old people?), and more recently even characters from franchises owned by other companies, like Sega’s Sonic the Hedgehog. The new version of “Smash Bros.” escalates that considerably by including every character who has ever appeared in a “Smash Bros.” game, giving players upwards of 60 characters to beat each other up with.

That’s quite a lot of characters to pick from, as many fans pointed out.

Also fun fact: if Daisy and Ridley sound familiar to those of you who aren’t Nintendo superfans, there’s a really good reason for that. In fact, we’ll let the myriad “Star Wars” jokes about that coincidence explain why.

HAA! Nintendo you can't trick me with your hidden characters for Smash, you're so obvious got it. Rey is going to be in Super Smash Bros. Ultimate. Who were the two characters announced today; Daisy and Ridley and who plays Rey, Daisy Ridley. Boom gotcha, try harder next time pic.twitter.com/OeGm3IsE3h

I can't believe Daisy Ridley is in Smash Bros. pic.twitter.com/b6g5ImNQuz

And also, because the internet, here are some other jokes for you to enjoy:

I can only assume that, "Smash," is trending because everyone is once again raving about the spectacular music of @smashmouth.

in all the excitement please, dont forget the original Smash Brothers: Fraser and Niles

i hope you all are really happy ridley is in smash because he killed mario and mega man. theyre both dead for real. no more mario or mega man games.

with all this smash bros stuff going on i might as well dust off this treasure i whipped up years ago pic.twitter.com/wx1O8lSNzh

On August 23, 1991, the Super Nintendo Entertainment System landed in North America — and we’re celebrating its anniversary with a list of its greatest titles

20. "Yoshi's Cookie" (1993) -- The most enduring type of game today is the puzzler (see: everyone's obsession with Candy Crush a few years back), and while "Yoshi's Cookie" may be sort of a lost gem, it remains a standout on the Super Nintendo.
View In Gallery