“This was a challenging day for a lot of voters in L.A. County and I certainly apologize for that,” Dean Logan told the Los Angeles Times. “That’s something that has to be better.” (Representatives for the county registrar-recorder and county clerk did not immediately respond to TheWrap’s request for comment.)

The $300-million voting system essentially replaced neighborhood polling places with regional voting centers and implemented the use of touch-screen devices for voters to use. But as polls in California were scheduled to close at 8 p.m. PT, the new system largely disappointed as some voters reported waiting upwards of four hours as machines experienced technical problems and lines snaked around vote centers well into the night.

At voting centers in Santa Monica, the wait times had been around an hour to 90 minutes during the day but extended to an estimated three hours by 6 p.m. Polling workers informed voters that the system was having difficulty connecting with California’s voter database and that only five people could be processed at a time.

“I have never seen anything like this,” one poll worker was heard saying. 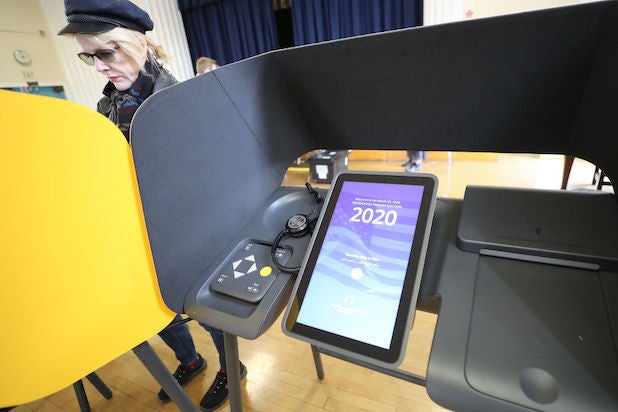 At the University of California, Los Angeles, Rafael Návar, the California state director for Bernie Sanders’s campaign, said that only nine out of 36 machines were working. “Lines are almost 2 hours long for students who need to go to class. Please resolve this ASAP to ensure all students are able to vote,” Návar tweeted.

And in Palms, the situation wasn’t much different, and some voters even reported at least one location running out of “I Voted” stickers by early evening.

The hiccups in L.A. County were enough cause for concern that on Tuesday evening, Bernie Sanders’s campaign filed for an emergency injunction to extend voting hours in the state due to “extreme wait times” at some vote centers in L.A. Logan also said at a Tuesday night press conference that he had considered going to the courts to request an extension as well but decided against it because voters were already waiting at the designated voting centers.

California senator Kamala Harris also criticized the wait times on Twitter and wrote, “We must do better.”

Still, many voters didn’t allow the wait times to deter them from voting and waited patiently in line.

“Turn around mom, turn around,” one man at the Daniel Webster Middle School in West Los Angeles said to his mother once he saw how long the line was.

“I didn’t walk all this way to turn around,” his elderly mom replied.