(Warning: Major spoilers ahead for the season six premiere of “Supergirl”)

The final season of “Supergirl” is starting off on a rough note for Supergirl herself. The final moments of the premiere saw Kara Danvers (Melissa Benoist) returned once again to the Phantom Zone, this time at the hands of Lex Luthor (Jon Cryer). And so the question for the beginning of this final season is simple: can the Super Friends get her back?

The odds may not be as dire as they seem. After all, they finally have a full team in their corner. Lena (Katie McGrath) is in on Kara’s secret now and making peace with it, simultaneously making Lena an invaluable, full-time asset to the team. And, based on the final moments of the premiere, Kelly Olsen will soon be in the know as well. Because now it’s official: Kelly is the last to know that Kara Danvers is Supergirl.

“Yes, she is. She is,” Azie Tesfai, who plays Olsen, confirms to TheWrap with a laugh. “And that is something that the fans have been asking me a lot, and I never answer.”

Also Read: 'Supergirl' to Air on The CW This Spring Due to 'Superman & Lois' COVID-19 Production Shutdown

It’s a fair question; Kelly has worked with Supergirl and her team a lot, thanks to her relationship with Alex Danvers (Chyler Leigh). The reasonable assumption would be that Alex had let Kelly in on the secret. But alas, Kelly has been just as in the dark as Lena — which begs another question: will Kelly have as severe of a reaction as Lena did?

On that, Tesfai is staying mum. But let’s remember, Kelly is the psychologist of the group; she maintains healthy relationships and communication, and has actual coping mechanisms. 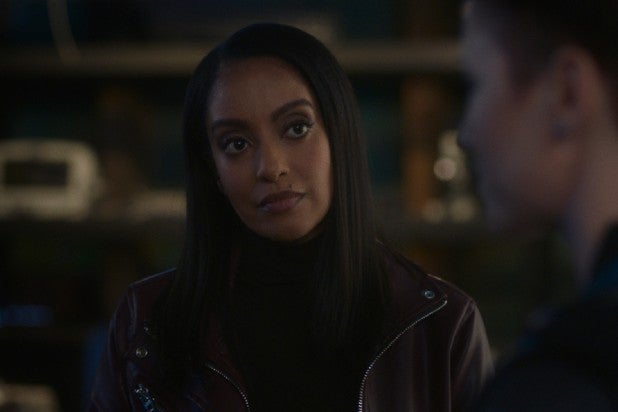 One thing Tesfai will admit though, is that she definitely shares more scenes with Supergirl this season. “Mel and I, the other day, were talking about how there’s so many scenes now where it’s like, Kelly and Kara walking off to go do something together,” Tesfai says. “And we’ve never had that, so that’s exciting.”

That might also bode well when it comes to how long Kara will be in the Phantom Zone. It’d be a bit hard for the two of them to share scenes there, considering the Phantom Zone would, you know, kill Kelly. So hopefully, that means Kara will return to National City sooner than later.

That said, Kelly and the Super Friends will really have to put their heads together to get Kara back. But with everyone in on things now, Tesfai promises this season of “Supergirl” will give fans something we’ve been hoping for for months now: true ensemble scenes.

“There is a lot of group scenes with Lena and Kelly. And I think to have these two characters who are sometimes included, sometimes not, to be always included in these pow-wows and problem solving, it was exciting for me,” Tesfai says. “I mean we really do, in the first half of the season have true group scenes where every single one of the Super Friends and Lena and Kelly are all there to figure things out.”

Of course, Kelly will be doing a bit more than just figuring things out and helping from a distance this season. “Supergirl” showrunners Jessica Queller and Robert Rovner revealed in an interview with EW that Kelly will be joining the “super” part of the Super Friends, finally taking up the Guardian mantle from her brother James (Mehcad Brooks). It’s a move that fans have been hoping for — and, according to Tesfai, regularly trying to get her to spill the beans on — since Kelly used the shield to help save people during “Crisis on Infinite Earths.”

We don’t know when it’ll happen yet, but when it does, “Supergirl” will officially have its next Super Couple. Because, in the closing moments of the season six premiere, Alex officially adopted the moniker of Sentinel, completing her transformation into National City’s newest hero.

But that doesn’t come without its stressors for Kelly. It’s one thing to be (very) okay with her girlfriend’s uniform; it’s another to be okay with the job that comes with it.

“You know, I think it comes in layers with her, which is…I’m happy that we did it this way,” Tesfai admits. ” You know, you can say you’re okay with something and be okay with it, and then specific situations come up and you have to reassess how you feel. Again, they’re so healthy. Everyone should be like Kelly and Alex, in terms of how well they communicate. But it is like check in and reassessing of ‘What is it like when your girlfriend’s a superhero?'”

For what it’s worth, #Dansen shippers probably don’t have any reason to worry about the fallout of Kara’s secret when it comes to Kelly and Alex’s relationship. As Tesfai lovingly notes “Kelly is so wonderful. I would’ve been angry, but she’s just such a dream girlfriend, you know? She gets it. She gets everyone’s perspective on things, and she’s so kind and empathetic that their relationship continues to be such a standard of healthy love that I think everything brings them closer together.”