WARNING: Spoilers ahead for the mid-season finale of “Supergirl.” Don’t read if you haven’t seen it.

Getting in and out of the Phantom Zone is no easy task, but we always knew that if anyone could do it, it was Alex Danvers and the super friends. And indeed, in the mid-season finale of “Supergirl,” Kara made it back to her family. And, as it turns out, it was more than a reunion between on-screen sisters; it was a reunion in real life too.

Admittedly, it looked for a moment like the reunion might be an illusion, what with all the characters experiencing their worst fears and struggling to separate what was real and what was fake, thanks to some Phantom Zone turbulence freeing the Phantom aboard the Tower ship (because yeah, the Tower is also a SHIP). But in the end, Kara and Zor-El made it onto the ship just before a hoard of Phantoms could descend, thanks to a massive burst of yellow sun energy allowing Kara to regain her powers. Naturally, her sister was the first person she ran to for a hug.

Unfortunately, the episode ended there, leaving us to wait for an actual conversation between Kara and her sister until the show returns for its final episodes in August. But we do know one thing: for Chyler Leigh, who plays Alex, the Danvers sisters reunion was “not at all” acting. 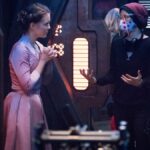 Also Read:
‘Supergirl': Chyler Leigh on Her Directing Debut and Why She Had Few Notes for Young Alex Actress

And with that, their already effortless chemistry became even easier. “It was a matter of Alex and Kara, Mel and Chyler, you pick back up where you left off, you know” Leigh adds.

But at the end of the day, it was more than just their sisterly bond that made the moment so special. For Leigh, it was a moment where Alex Danvers got to help save her sister — something that, as the Midvale episodes showed us, Alex made her personal mission time and time again. This time was just on a grander scale.

“She was able to be, for her sister, what she always aimed to be,” Leigh says. “So, it’s pretty special.”