After the season premiere of “Supergirl” sent Kara Danvers (Melissa Benoist) to the Phantom Zone, things have been a bit hectic for the Super Friends back in National City. While they desperately try to bring her back, Martian Manhunter (David Harewood), Sentinel (Chyler Leigh), Brainy (Jesse Rath) and Dreamer (Nicole Maines) have taken over hero duties, with Dreamer pulling double time, also covering for Kara at CatCo as just regular Nia Nal.

It’s a stressful time, and things may not be getting better any time soon — particularly for Nia. In ranking the Super Friends based on how badly they need therapy, Azie Tesfai, who plays Kelly Olsen on “Supergirl,” put Nia in the top three, only behind Kara and Lena (Katie McGrath), citing her reasoning as Nia having a lot going on in the final season of “Supergirl.” At that, Nicole Maines isn’t all that surprised.

“Listen, our girl’s been through it,” Maines tells TheWrap with a laugh. “When is the last time that Nia Nal has been okay? I think it’s been the beginning of season four, since she was like, good? She’s always had something going on.”

Indeed, since Nia Nal’s introduction, we’ve seen her lose her mother, have a falling out with her sister, become a target for being transgender, become a target for being part alien, and now she’s lost her mentor to the Phantom Zone. The good news is, both Tesfai and Maines say that a lot of baggage is getting unpacked and dealt with in the final season of “Supergirl,” for everyone.

Also Read: 'Supergirl' Star Azie Tesfai on What's Next for Dansen and the Super Friends With Kara Gone (Video)

According to Maines, most of Nia’s arc will be centered on honing and understanding her powers. (And while we just might see Nia’s sister resurface, Maines “cannot for certainly say” if she’ll be any more okay with Nia being the one to inherit the family gift).

“When her sister left, and with her mom gone, the only person who could tell her VERY LIMITED information about her powers was Brainiac. And he couldn’t even really tell her that much without risking the space-time continuum,” Maines says. “So she’s really just been completely on her own, feeling around in the dark, just trying to get a’hang of these powers. And so her arc this season is going to be really grounded in finally trying to iron out all of the wrinkles and work out all of the kinks in her power, and working to become a fully fledged superhero.”

Of course, during that process, some new powers are going to pop up for Nia. In the “Supergirl” season premiere, we learned that she has now figured out how to physically interact with things while astral projecting — something that caused a bit of a headache for her and the Super Friends on Shelley Island in season 4.

Though Maines won’t give up any specifics on any other new powers, she does offer one big hint. “We know there’s the physical realm, and then there’s the dream realm. And Nia, this season in her powers, is starting to become a bridge between the two.”

That said, Nia Nal may still need some work on her dream interpreting skills, but Nicole Maines does not. Asked what she thinks the Super Friends dream about, Maines was ready to go. As she lays out in the video above, Kara dreams of potstickers and karaoke, Lena and Kelly dream of a world that’s just less stressful for everyone, J’onn J’onzz dreams of his family, and Alex dreams of kicking butt, just like she does in reality.

As for Nia and Brainy? They dream of the end of the world and electric sheep, respectively. In reality of course, Brainia (as they’ve come to be shipped) is in fact a dream team. 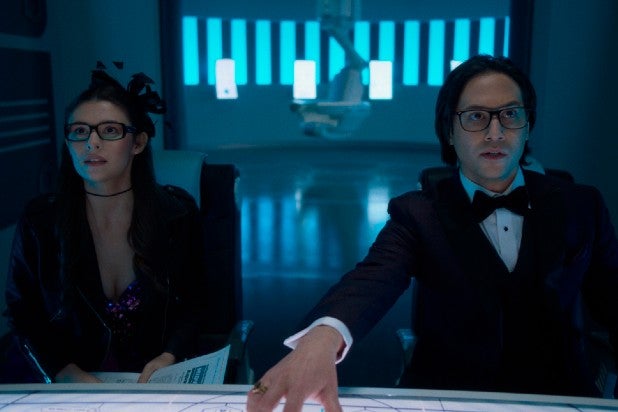 Brainy will, as always, help Nia as much as possible this season, and according to Maines, the pair will go on their fair share of adventures. Among those adventures will be a trip to Midvale — just not current-day Midvale. Next week, the pair will travel to Kara and Alex’s hometown in 2009, crossing paths with teenage versions of the Danvers girls.

Of course, then comes the question of how that may or may not alter the future timeline. It’s something that Brainy is very worried about. But while we’re talking about future timelines, we also had to ask how Nia’s relationship with Brainy — which Maines notes is stronger than ever this season, now that they’re finally on the same page — affects the future.

Lest we forget, prior to joining the Super Friends, Brainiac-5 was part of the Legion of Superheroes, and very good friends with Nura Nal, a direct descendant of Nia. So, are we about to have a weird post-Endgame Steve Rogers/Sharon Carter situation?

“I genuinely have no idea. All I can say is it’s some wibbly wobbly timey wimey stuff. Yeah, that’s the question isn’t it? How does their relationship affect Nura?” Maines says, contemplating. “I mean, Winn, Mon-El, Nura herself, have not come back to slap anybody. So we haven’t had a time-traveling cockblock yet, for lack of a better term. Excuse my French. So far, nothing’s imploded!”

You can watch our full conversation with Nicole Maines on the final season of “Supergirl” in the video above.