(Spoiler alert: Please do not read if you’ve not watched Monday’s episode of “Supergirl”).

The mystery of Hank Henshaw’s glowing red eyes has finally been solved. On Monday’s episode of “Supergirl,” the CBS superhero drama revealed that the DEO boss is actually the DC comic book character Martian Manhunter in disguise.

Executive producer Andrew Kreisberg discussed how he and the other producers decided to go this route while filming the pilot, in an internal discussion about how actor David Harewood would have made a fine Martian Manhunter if they ever did a series on the character.

“It was Geoff [Johns, DC Comics’ Chief Creative Officer and ‘Supergirl’ EP] who said, well why can’t he be? And we looked at each other, like, well wait a minute,” Kreisberg told reporters during a recent visit to the set. “And we started looking at everything in the pilot and this notion that we had already planned out that this Hank Henshaw character had a bad secret he was holding. And then we started thinking about, what if it was a good secret? Like a reverse of the Reverse-Flash. You think he’s bad, but then he turns out to not only be good, but literally the most good person in the DC universe. ”

For Harewood, the reveal that his character was actually the Martian called J’onn Jonzz was a relief.

“They told me about two weeks into my time here,” he said. “It was quite uncomfortable. A lot of what Hank said was exposition – this is the DEO, I’m this and you’re here, and it was an uncomfortable experience playing Hank in the pilot. so I was really pleased, actually. Martian Manhunter is such a huge character, and it took me on a whole new, different direction, and it was brilliant for me. As much as I tried, I couldn’t really find an angle to play Hank Henshaw that was interesting.”

J’onn J’onzz is now the most prominent alien character on the show next to Melissa Benoist‘s Supergirl herself, the Kryptonian Kara Zor-El. 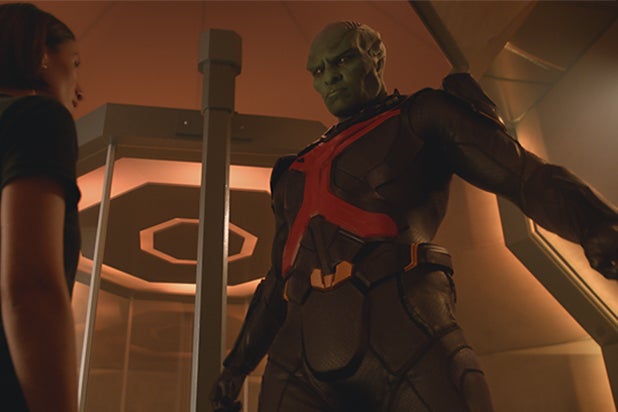 “It’s been really fun, it so fit in with how Supergirl has been evolving and how she’s somebody who’s embraced her powers and stepped out into the light, and in a way, J’onn is closeted, he’s afraid,” said Kreisberg. “He says in an upcoming episode, when Alex [Danvers, played by Chyler Leigh] is actually encouraging him to use his powers, saying what’s the difference between you and Kara? And he says, ‘Your sister looks like a cheerleader, and I look like a monster.'”

J’onn, Kara and Alex will be brought closer by the revelation of Henshaw’s true identity.

“[It’s great] watching this relationship that’s growing between him and Alex, and him and Kara, that started out in a gruff place, and then by the time you’re getting into the meat of the season, they’ve become this little family unit,” said Kreisberg. “He’s become this surrogate father to them, but at the same time they’re helping him become more human. It’s one of the great surprises of the show.”

“Having lost his own children, he’s got a lot of pain,” added Harewood. “A lot of pain, a lot of melancholy. These two girls represent something that’s very close to him.”

The actor and EP both promised a lot more exploration of the alien nature now that the big secret is out, with a flight sequence alongside Supergirl, flashbacks to his past on Mars, White Martians and Jemm all on the table.

“It’s sort of the secret of ‘Supergirl’ that within the body of the ‘Supergirl’ series, there is a Martian Manhunter series rolling throughout it,” said Kreisberg.