As Supergirl and her friends struggle to keep National City safe from Nyxly and her vengeful ire, an equally terrifying threat is on the horizon: the return of Lex Luthor. And as it turns out, his arrival will be particularly nice for the 5th dimensional imp.

Now, anyone who knows Lex Luthor knows that his truest love has always been — and probably always will be — himself. But according to “Supergirl” showrunners Jessica Queller and Robert Rovner, he and Nyxly will have a romantic story arc between them.

“One of the things we’re excited about is that Lex and Nyxly are gonna team up in a, not only a world domination way, but a love story,” Rovner revealed to TheWrap. “So we’re excited to see that.”

Yes, you read that right. Lex Luthor has found someone else to love. According to Queller, it’s largely because Nyxly is just as insane and maniacal as he is. 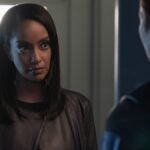 “Lex is gonna finally fall in love with his equal,” Queller said.

When exactly Lex will return and how he’ll do his wooing remains to be seen, but fans should be warned that he and Nyxly won’t be the only two problems the Super Friends are facing. The showrunners also admitted that Andrea Rojas’ (Julie Gonzalo) alter-ego Acrata will become a bit of a nuisance.

“What we can say about Acrata is that, in her quest for getting further embedded in the Super Friends, you know, she causes a bit of trouble,” Rovner said.

In fact, both showrunners promised there is “a lot of trouble to look forward to” in these final episodes, as the Super Friends fight to find the totems before Nyxly does.