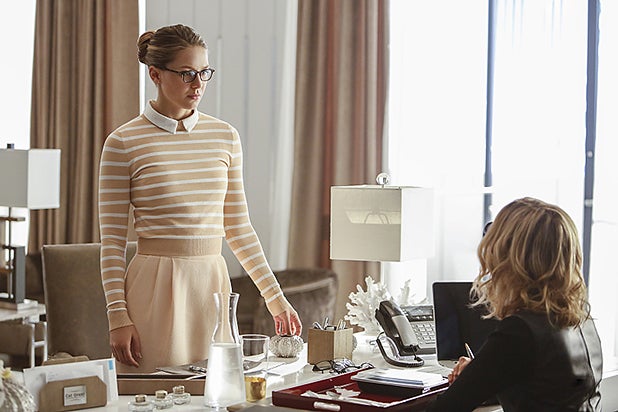 (Spoiler alert: Please do not read on if you haven’t watched Monday’s episode of “Supergirl”)

One of the biggest surprises in the Season 2 premiere of “Supergirl” came when Kara undid a major moment from the Season 1 finale.

After spending the majority of the episode trying to psych herself up for her first official date with James (Mehcad Brooks), Kara (Melissa Benoist) confessed that despite finally kissing him last season, her feelings have changed, and they’d be better off as friends.

“A superhero’s love life is always going to be a confusing thing,” Benoist laughed while discussing the surprising new development on a recent media call to reporters. “I wouldn’t rule out anything for her this year. So many things are changing for Kara, she’s open to just finding someone, or some kind of connection. Things are changing regardless, James and Kara’s relationship would change even if they decided to move forward. I think you can’t rule out that anything that can happen, with anyone. Not on our show. Not on a CW show!”

Another major moment for Kara on the “Supergirl” premiere came when she finally found her profession calling, and it’s in no small part thanks to her visiting cousin, Clark Kent (Tyler Hoechlin).

After teaming up to investigate Lena Luthor (Katie McGrath), Kara realizes she wants to be a reporter, just like Clark. Cat (Calista Flockhart), who was less than impressed when Kara told her she wanted to go into marketing earlier in the episode, revealed that she knew within five minutes of meeting Kara that she was destined for journalism.

“It’s definitely going to force her to get out of the office quite a bit,” Benoist teased of Kara’s new career. “It will heighten her senses. It’s fun to play that, it’s a huge part of her now. She might be involved in something she thinks is a good story, and now she has the freedom to say, yes, let’s do that. It gives her a bigger purpose outside of being Supergirl. I think that’s important.”