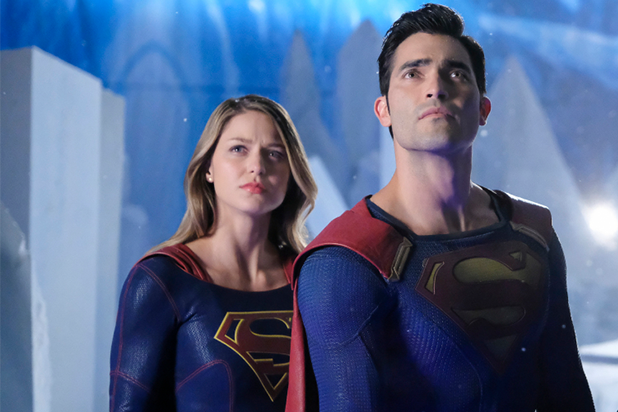 The CW’s annual “Arrowverse” crossover continues to take shape, as actors continue to share pictures during the production of the upcoming three-night event. “Supergirl” star Melissa Benoist shared a photo with Tyler Hoechlin, who is reprising his role as Superman for the “Elseworlds”-themed crossover, and Elizabeth Tulloch, who will be joining the heroes as Lois Lane.

“Two kryptonians and a journalist walk into a crossover,” Benoist captioned the photo.

This isn’t the first photo we’ve seen of the Kryptonians in this year’s crossover.

Fans were treated earlier this week to a peek at Hoechlin’s new, all-black Superman suit. “Arrow” star Stephen Amell shared a photo from set on Monday featuring himself, Hoechlin, and “The Flash” star Grant Gustin. In that photo, Hoechlin has traded out the red and blue outfit he wore previously on “Supergirl.”

The event will cause a few shakeups to the network’s regular schedule. “The Flash,” which usually airs on Tuesdays, will kick off the three-night crossover on Sunday, Dec. 9, followed by “Arrow” on its regular Monday night, and then “Supergirl” — which airs on Sundays this season — in a special slot on Tuesday.

For everything we know about the crossover, head over here.