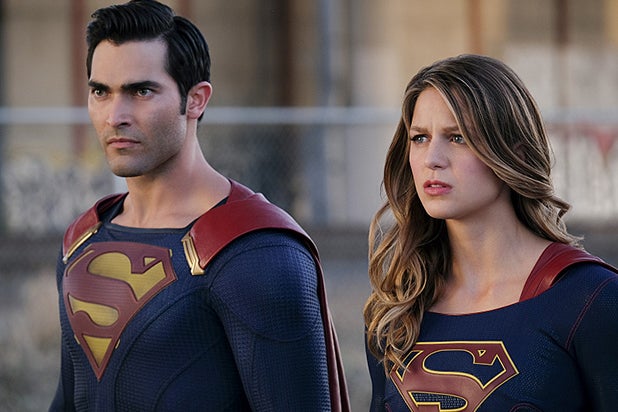 “Supergirl” star Melissa Benoist never concerned about being overshadowed by her cousin Superman’s arrival in Season 2.

“I wasn’t worried about it, to be honest,” the actress told reporters on a conference call before the premiere. “I thought it was the natural progression of the story…. He’s her only living family member, and it’s kind of a necessary relationship to explore, for both of them.”

Tyler Hoechlin makes his debut as Clark Kent in the first episode of “Supergirl” when it premieres on The CW, having moved over after a season on CBS.

“Not only do you get to see the amazing relationship between Clark and Kara, but you see how he has relationships with everyone on the show,” Benoist continued, teasing Superman’s arrival. “He has history with a lot of them, and some of them he meets for the first time, and it’s hilarious, like Winn [played by Jeremy Jordan]. It’s only going to reap benefits.”

The relationship between Lena and Kara is complicated and still developing, according to Benoist.

“Obviously, it’s hard for anyone in the House of El trust a Luthor,” she said. “But I think Kara and Lena’s relationship is a very interesting one, and one they’re still figuring out. But it’s definitely going to post some changes and, I don’t know, it’s a good relationship that I think people will be very interested in.”

And, of course, Kara will be meeting even more familiar DC characters when she participates in her first-ever crossover with the CW Arrowverse shows, “Arrow,” “The Flash” and “Legends of Tomorrow.”

“I think she has funny interactions with all of them,” she teased of the upcoming four-night event. “Of course whenever she’s with The Flash [Grant Gustin], it’s so fun. I think any interaction with Arrow [Stephen Amell] there will be some comedy and interesting antics. I’m excited for her to meet White Canary [Caity Lotz] and Atom [Brandon Routh], and everyone, really. We’ve been shooting it, we’re in the middle of filming them, and it’s been so much fun; I can’t even tell you how much fun it’s been. It’s kind of a crazy feeling, to be surrounded by that many people in superhero outfits.”

“Supergirl” Season 2 premieres Monday at 8 p.m. ET on The CW.