Lois Lane’s little sister has arrived in National City, and the newest photo from CBS’ “Supergirl” shows Jenna Dewan-Tatum in character for the first time.

The photo, shared via EW, shows Dewan-Tatum as Lucy in a scene with Jimmy Olsen (Mehcad Brooks) and Supergirl herself, Kara Zor-El (Melissa Benoist).

The show will explore the character’s comic book roots of a romantic history with Jimmy, who’s now going by James on the show. This version of Lucy Lane is described as brash and funny and just as successful as her older sister.

“We hope to explore the history that Lucy has with James Olsen — or, as Lucy knows him, Jimmy Olsen,” the show’s executive producer Ali Adler told EW. “I think we’re going to bring in her father. She not only plays a romantic foil with whatever Kara and James are brewing, but people will also be surprised that she’s really a woman’s woman. She and Kara develop their own friendship, too. We’re not just bringing her in to purposefully create tension. She serves a larger story drive.”

The series, from Berlanti Productions in association with Warner Bros. Television, will revolve around Kara at age 24, as she decides to embrace her superhuman abilities and become the hero she was always meant to be.

“Supergirl” premieres Oct. 26 on CBS. See the full photo below. 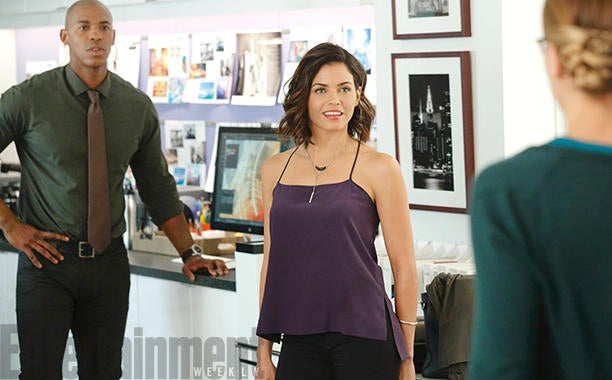