Talk about a tale of two TV seasons.

Eleven of the 12 sophomore broadcast shows that have returned thus far have seen their TV ratings drop by double digits in the advertiser-valued 18-49 demographic when compared to their series debuts last season. Plus, that 12th one comes with a giant asterisk aside it.

The biggest losers may be victims of new day and time slots. Fox’s Morris Chestnut series “Rosewood,” now on Thursday nights without mega-hit “Empire” following it, has plummeted a whopping 71 percent from its first-season numbers, for example.

“Supergirl,” which moved from CBS to the less-desirable and lower-viewed CW, fell 65 percent in its opening on the new network — which was a decent performance.

The third biggest drop was NBC’s “Blindspot,” which has fallen 58 percent from Season 1. The thriller no longer follows “The Voice” at 10 p.m. ET, but instead leads off Wednesdays at 8 p.m.

Not all schedule shifts have been so detrimental:

Ratings for ABC’s “The Real O’Neals” technically increased from a 1.1 to a 1.2. However, that jump comes with an asterisk: Before its official premiere last spring, the network aired two preview-coded episodes that posted a 1.8 and 1.9, respectively. The 1.1 start was coded as the actual series premiere due to clever scheduling.

The critical darling NBC sitcom “Superstore” has only slid 17 percent, despite a move from Monday at 8 o’clock to Thursday at the same time for Season 2. Of course, that young series didn’t start as high as “Blindspot or “Rosewood,” either.

The third smallest of the slides was for CBS’ medical drama “Code Black,” which opened Season 2 down a mere 20 percent. Of course, that series tied ABC’s Friday comedy “Dr. Ken” for the lowest starting point. (“Dr. Ken” still dropped another 40 percent, to a 0.9 rating.) “Chicago Med,” which lost its own “Voice” lead-in due to a move from Tuesday at 9 to Thursday in the same hour, had a somewhat more modest 36 percent slippage in its second-season opener.

Other returning series, including Fox’s “Scream Queens” and “Lucifer” as well as ABC’s “Quantico,” lost just under half their audience from the first season premiere night last fall. “DC’s Legends of Tomorrow” halved itself perfectly, which is actually not so perfect for the CW.

It’s important to keep in mind that “live” TV viewing continues to decline year-after-year. Equally as noteworthy, series debuts are heavily marketed by networks and often given the most beneficial launch time slots. By Season 2, the shows have already settled into their permanent night and time. It is highly rare for a show to truly grow or even stay flat from series premiere to its sophomore season return.

Here are the premiere over premiere changes of all 12 returned (thus far) sophomore broadcast shows, with percentages ranking them from best to worst: 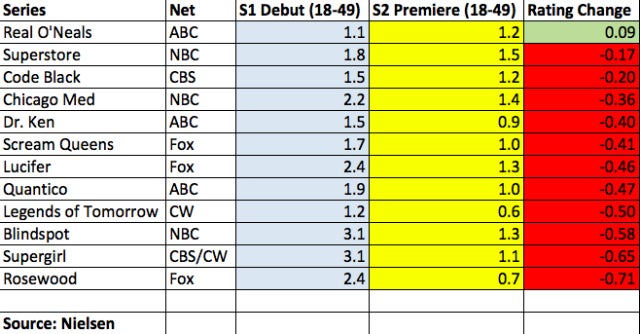