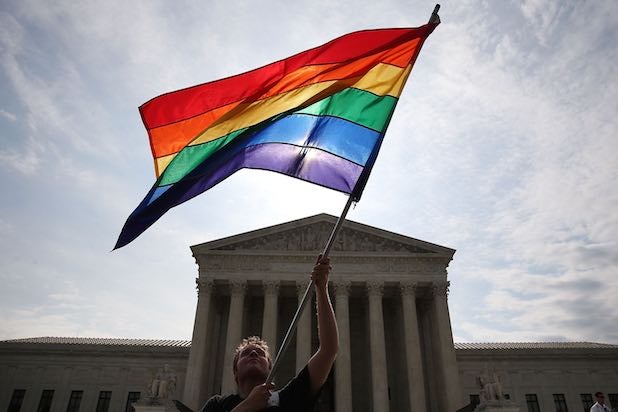 The Supreme Court of the United States delivered a historic ruling on Friday, declaring gay couples across the country have the constitutional right to marry, no matter what state they live in.

The 5-4 decision also says that states may no longer reserve the right only for heterosexual couples. The SCOTUS was weighing in on an appellate court’s decision to uphold same-sex marriage bans in Michigan, Kentucky, Ohio and Tennessee, and found the bans unconstitutional.

“From their beginning to their most recent page, the annals of human history reveal the transcendent importance of marriage,” Justice Anthony Kennedy wrote in the majority opinion. “Far from seeking to devalue marriage, the petitioners seek it for themselves because of their respect–and need–for its privileges and responsibilities. And their immutable nature dictates that same-sex marriage is their only real path to this profound commitment.”

The landmark decision is the result of decades of LGBT activists fighting for marriage equality, beginning in 1970 when two University of Minnesota students, Richard John Jack Baker and James Michael McConnel, applied for a marriage license and were denied. The couple argued Minnesota’s marriage law made no mention of gender, but both the state’s Supreme Court ruled against them, and the U.S. Supreme Court eventually dismissed an appeal.

The legal fight led the majority of states, starting with Maryland, to pass laws banning same-sex marriage. It wasn’t until 2004 that Massachusetts became the first state to legalize same-sex marriage. Before Friday’s decision, 37 states and the District of Columbia had recognized gay marriage.

Predictably, Republicans and conservatives have expressed disappointment in the court’s decision through social media, while liberals are celebrating. Presidential contender Hillary Clinton was among the first to react on Twitter, saying she was “proud to celebrate a historic victory for marriage equality, and the courage and determination of LGBT Americans who made it possible.”

Our new favorite map. RT if you live in a state where marriage equality is law. pic.twitter.com/7GlCwCJHyg

Hollywood stars, many of which have been very vocal on the social issue over the years, are also celebrating.

“Love won,” Ellen DeGeneres tweeted, while even HBO’s “Game of Thrones” — a fantasy series featuring a number of gay characters — was inspired to comment.