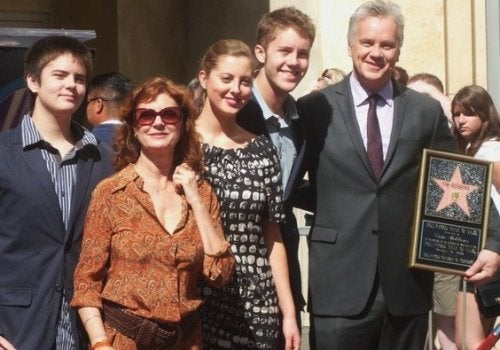 Longtime couple Susan Sarandon and Tim Robbins have split up after more than two decades together.

Sarandon’s rep, Teal Cannaday, told People in a statement: "Actress Susan Sarandon and her partner of 23 years, actor Tim Robbins, have announced that they separated over the summer. No further comments will be made."

Although they never married, they have two sons together, Jack, 20, and Miles, 17.

Sarandon’s daughter Eva, whose father is director Franco Amurri, also lives with the couple. She accompanied her mother to recent premieres of "The Lovely Bones."

Sarandon previously was married to actor Chris Sarandon from 1967 to 1979; they met in college.

Sarandon and Robbins have long been liberal activists, involved in causes ranging from human rights to ending the war in Iraq.

Their antiwar activism created a flurry of controversy in 2003, at the 15th-anniversary celebration of "Bull Durham" at the Baseball Hall of Fame. The hall’s director, Dale Petroskey, a Reagan-era White House staffer, canceled the celebration because, he said, Robbins’ antiwar stance "undermined the U.S. position" and put U.S. troops in danger.

The couple’s "Bull Durham" co-star, Kevin Costner, came to their defense, saying, "I think Tim and Susan’s courage is the type of courage that makes our democracy work."

They worked together on other projects, including "Cradle Will Rock," which Robbins directed.