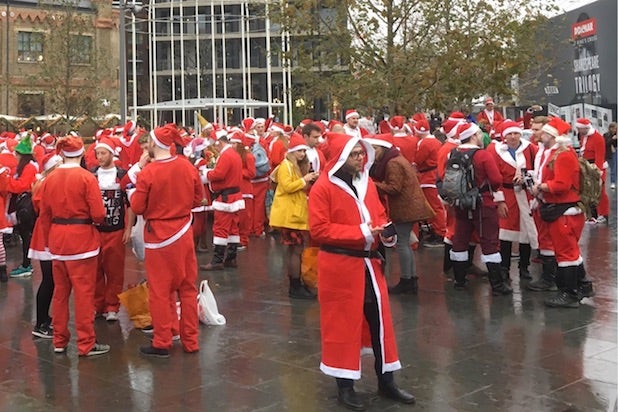 Santa Claus is coming town. In fact, he already came to 380 towns, 51 countries and, according to scores of people on social media, he also paid a visit to a bar or two!

No, Santa hasn’t been naughty; he’s still nice. The plethora of white-bearded chubby guys in red suits was just the annual gathering of faux Santas across the globe for what Yahoo has deemed “the worldwide SantaCon holiday pub crawl.”

According to SantaCon.info, SantaCon is simply a gathering of people (men and women) dressed as Santa just for the fun of it.

And, as they put it, “being silly and probably partaking of some alcohol.” That explains the red cheeks and uncontrollable chuckle.

Although the holiday spirit is usually contagious, some Grinches find them just plain annoying, as witnessed by the tweets below. To them, we say “Bah humbug!”

#SantaCon Everyone in NYC today pic.twitter.com/vDKOUkGMji

We're not sure what the driver of this van was thinking when he decided to drive down a road blocked off by #SantaCon ???????? #SantaSaturday pic.twitter.com/yViTbw9d0X

Hating on #santacon really brings the city together.

#SantaCon when drunk white people pee and vomit in the streets, disobey crossing signals, and somehow don't get arrested or beaten by cops.

Today's the day you'd be most likely to uppercut an inebriated Santa Claus imposter. #santacon

Drunken Santas and passed out elves must really ruin the mystique of Christmas for kids in the city. #SantaCon