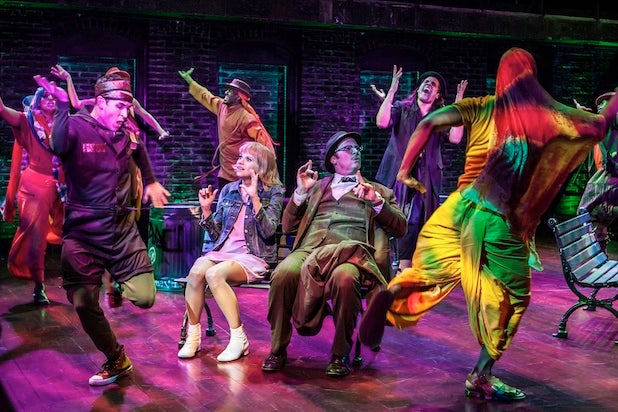 That’s a lot of ifs, but Sutton Foster checks every one of the boxes in the funny, and often very poignant, new revival of “Sweet Charity,” which opened Sunday at Off-Broadway’s Pershing Square Signature Center.

The extreme masochism of taxi dancer Charity Hope Valentine is a challenge, especially in 2016, but Foster turns the character’s commitment to being abused by men into a feminist statement while remaining a total delight to watch. Charity here resembles a galumphing giraffe in a bad Dynel wig. Both hilarious and pathetic. One of Foster’s most recent Broadway assignments was playing Reno Sweeney in “Anything Goes.” From ballsy then to doormat now, the actress really can do anything.

Also Read: Sutton Foster to Star in Off Broadway Revival of 'Sweet Charity'

“Sweet Charity” begins where the show’s source material, Federico Fellini’s “The Nights of Cabiria,” ends. A street walker is simultaneously abandoned by her fiancé and robbed of her “dowry,” which she carries in her purse. Neil Simon’s book, written in 1966, is an exceptionally well-structured adaptation of the classic film, but it’s surprisingly flat in the humor department. Almost every laugh in this New Group revival comes not from a Simon zinger (of which there are precious few) but rather silent physical comedy delivered with inspired adeptness from the leading lady under the direction of Leigh Silverman. The scene where Charity watches from the closet while her trick for the night (Joel Perez in multiple roles and displaying a great tenor in each of them) makes love to his girlfriend on the rebound (Nikka Graff Lanzarone) is as over-the-top comic as it is, in the end, downright tragic.

“Sweet Charity” is not a great or even a very good musical. (Two Broadway revivals made that abundantly clear.) Its score by Cy Coleman and Dorothy Fields soars only with “Big Spender,” the taxi dancers’ ode to exploiting and being exploited by men. Silverman’s super-fluid staging never really leaves that hellhole of a dance hall,  where we first hear “Big Spender.” The smell of cheap booze and cigars lingers. Upstage and upstairs, Silverman presents an all-female band, as if to tell us that, regardless of our job, we’re all working girls in the end. Foster, Silverman and Schuler Hensley turn dross into, if not gold, something more touching than a well-manufactured evening of musical-comedy glitter.

Charity meets her leading man rather late in the show, just before the end of act one when she and the neurotic nerd Oscar meet and get stuck in a malfunctioning elevator. Hensley presents what has to be the schlubbiest romantic lead ever. He plays the character’s claustrophobia for real, not for laughs, and while that portrait of desperation doesn’t lead to the most upbeat first-act capper, it’s a good omen for what’s to come in the second half.

After we get beyond the desultory “Rhythm of Life” number, Charity and Oscar’s romance turns into an extended plaintive duet of two lost, suffering souls. And the taxi dancers’ gripes take on a new, even greater urgency.