First, go watch DJ Snake and Lil Jon’s “Turn Down For What” video. It’s entirely possible that you already did that several dozen times during its fiery run through pop culture, but maybe not. There’s a lot of stuff out there vying for your attention. So go give it a look. It’s important.

It’s important because it builds, in three and a half minutes, a freaky monument to absurd body comedy, one where the autonomous, uncontrollable breasts, buttocks and penises of regular people become instruments of weird, sexy deliverance. While the song chugs along and the visuals get crazier, Lil Jon yells nonsense. It wants to teach nothing, but it succeeds at teaching joy. It’s almost perfect.

Daniels, the twins-ing label self-applied to “Swiss Army Man” co-directors Daniel Kwan and Daniel Scheinert, are also the guys behind “Turn Down For What,” and they take their obsession with grotesque applications of bodily functions to fantasy levels of silliness in this almost-successful film about love, friendship and loneliness.

Hank (Paul Dano), introduced mid-suicide attempt, appears to be shipwrecked somewhere, alone. At the moment he decides to end it all, he sees a dead body (Daniel Radcliffe) that has washed ashore. Inexplicably and powerfully flatulent, the body gives Hank a new lease on life. He uses it as a Jet Ski, as a water fountain, as a weapon, and — when it begins to speak and call itself “Manny” — as a friend.

Manny asks a lot of questions about life and humanity, E.T.-style, and Hank explains it all to him. This confuses Manny, who needs more instruction via Hank’s recreation (using rocks, leaves, branches and scraps of material) of movie theaters and bus interiors. The results are what would happen if Michel Gondry had designed “Gilligan’s Island.” 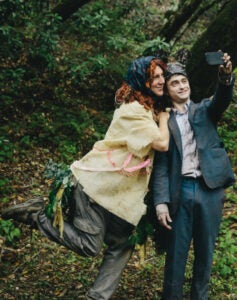 But there’s more that Manny doesn’t understand. Love and personal connection are mysterious to him, so Hank winds up in goofy drag for a teachable moment, presenting himself as the object of his own daily commute’s affection, an idealized woman (Mary Elizabeth Winstead) about whom he knows very little, but whose every move he has studied and turned into a projection of loneliness.

Turns out Hank isn’t so clear on the subject of love or personal connection, either; he’s more like a benign stalker. (And has there ever been a stalker who didn’t think of himself as harmless?) At this point, it’s unclear what Daniels want to say about Hank’s plight, so they fumble his sadness with overly familiar indie-film oddballery. A too-precious folk soundtrack by Manchester Orchestra; a script that stuffs its last half with post-adolescent insights about people needing to keep it real and be honest with their feelings; made-up songs that describe the action taking place on screen: it’s magical flatulence cuteness overdrive.

That the film’s plea for human tenderness is couched in a discussion about the social contract and how it’s better for everyone if people hold in their farts does nothing to make any of it funnier or deeper. By this point in the action, farts are just one of the recurring motifs.

But earnestness is the very quality that threatens to sink the film. From “Catcher in The Rye” to “Rebel Without a Cause,” “The Breakfast Club” to “The Fault In Our Stars,” the heartfelt cry of young adults is almost always one involving sincerity, about strenuously battling against the chilling effect of adult propriety. The problem is we already all know that when you grow up your heart dies, and lines like, “No one deserves to ride the bus alone,” are more likely to provoke laughter than tears of empathy.

So tell us something new, Daniels. Or maybe don’t try to teach us anything at all. If “Swiss Army Man” were a silent, scoreless effort, presented as otherworldly slapstick, or if it had employed Lil Jon to yell some obliquely connected, thematic exhortations and non sequiturs, it might have reached the heights of its music video predecessor. As it plays out, though, it smells a little too much like teen spirit.