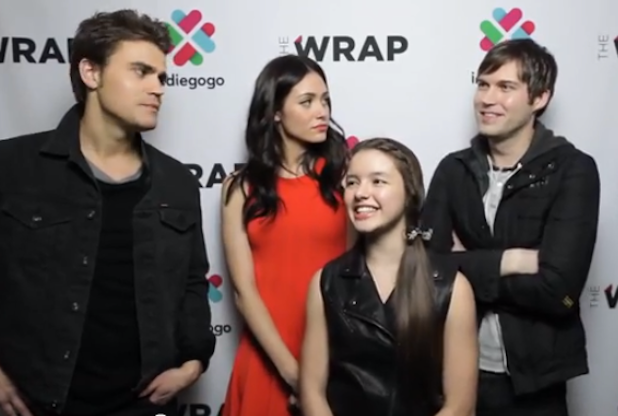 Shawn Christensen has conquered South by Southwest just one year after he won an Oscar. Christensen’s “Before I Disappear,” a feature length film based on his Oscar-winning short “Curfew,” won the audience award for Best Narrative Feature Saturday at the Austin-based festival.

Christensen stars in the film alongside 14-year-old Fatima Ptacek, both of whom reprised their roles from the short. The Oscar enabled the former musician to recruit a stellar cast for his feature debut, including Emmy Rossum, Paul Wesley and Ron Perlman. The film chronicles a depressed young man who must look after his niece for a few hours.

Also read: 10 Things You Missed at SXSW: Leslie Bibb Is Writing a Movie, Robert Duvall Needs Money and Everyone Is Copying Lena Dunham

“When we started getting good positive feedback [to the short], I knew I wanted to expand it into a feature,” Christensen told TheWrap at South by Southwest.

“And by positive feedback, he means he won the Oscar for best short film,” Rossum chimed in.

Watch our interview with Christensen and his cast below:

The other big winner Saturday was “Vessel,” Diana Whitten’s documentary about a doctor who gives abortions at sea. A SXSW jury awarded her movie a prize for “political courage” earlier in the week.

The festival only accepted eight movies in both the narrative and documentary competition, turning away thousands of submissions. It seeks films from lesser-known filmmakers who have demonstrated promise, Christensen being a prime example.

SXSW exhibits more flexibility in other categories, in which it will accept movies that premiered at other festivals and are made by more established filmmakers. It balances crowd-pleasing, mainstream movies, like the Seth Rogen comedy “Neighbors,” with movies like “Fort Tilden,” which won the top jury prize.

Diego Luna‘s “Cesar Chavez,” a biopic about the titular activist that will open in theaters later this month, won the narrative spotlight award while Ben Knight and Travis Rummel’s “Dam Nation,” a film about our nation’s changing attitude towards dams and how those structures have affected our waterways, won the documentary spotlight award.

You can watch a video on that here:

Anlo Sepulveda and Paul Collins also won an award for a film about America’s rivers, specifically Texas’ Yakona river. The two told the story from the perspective of the stream.

HBO took home a pair of awards Saturday, as Mike Judge’s new show “Silicon Valley” won the award for Best Episodic and “True Detective” won for excellence in title design at the film design awards. Episode is a new category at SXSW, which admitted TV series pilots into the festival this year.

Audience Award Winner: Before I Disappear

Audience Award Winner: The Case Against 8