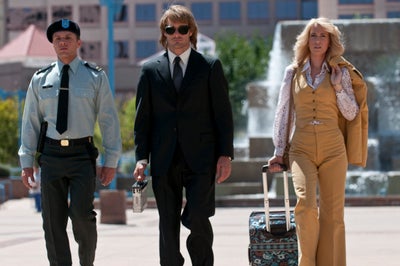 The world premiere of Jorma Taccone’s "MacGruber" (left), as well as Jay & Mark Duplass’ "Cyrus," Shane Meadows’ "Le Donk & Scor-zay-zee" and Steven Soderbergh’s "And Everything Is Going Fine," are among the films set to unspool at this year’s South by Southwest Film Conference and Festival in Austin, Texas. 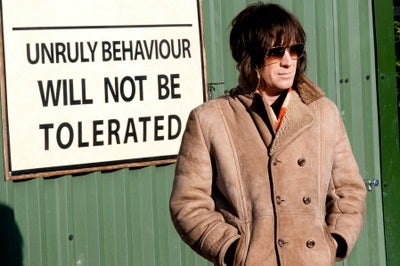 “It was an incredibly competitive year with record submission numbers, and although we had to make really tough decisions, we are extremely excited about this lineup,” festival producer Janet Pierson said in a statement.

“We feel we’ve achieved a great balance that continues our tradition of screening films across all budget lines and styles, and we take particular pride in witnessing the evolution of SXSW alumni as well as the vitality of fresh voices.”

Eight narrative features and an equal number of documentaries will vie for the Grand Jury Prizes in their categories.

The narrative feature competition includes "Brotherhood" (directed by Will Canon), "Dance With the One" (Mike Dolan), "Earthling" (Clay Liford), "Helena From the Wedding" (Joseph Ifantolino), "The Myth of the American Sleepover" (David Robert Mitchell), "Phillip the Fossil" (Garth Donovan), "Some Days Are Better Than Others" (Matt McCormick) and "Tiny Furniture" (Lena Dunham).

From the SXSW press release:

The comprehensive lineup, by section and with synopsis descriptions, follows below. The final panel and conference lineup as well as the short film program will be announced next week.

Films screening in Headliners are:

Cyrus
Directors and Screenwriters: Jay and Mark Duplass
With John’s social life at a standstill and his ex-wife about to get remarried, a down on his luck divorcee finally meets the woman of his dreams, only to discover she has another man in her life – her son. Written and directed by Jay & Mark Duplass, the iconoclastic filmmaking team behind The Puffy Chair, Cyrus takes an insightful, funny and sometimes heartbreaking look at love and family in contemporary Los Angeles. Cast: John C. Reilly, Jonah Hill, Marisa Tomei, Catherine Keener, Matt Walsh

Micmacs / Micmacs à tire-larigot (France)
Director: Jean-Pierre Jeunet. Screenwriters: Jean-Pierre Jeunet and Guillaume Laurant
Drawing on one of France’s most popular screen stars, the incorrigible Dany Boon from the comedy megahit Bienvenue chez les Ch’tis, as well as a cast of some of the country’s best-known actors, Jeunet turns on the afterburners in this searing piece of romantic filmmaking set against the storm clouds of warring arms dealers. Cast: Dany Boon (U.S. Premiere)

SPOTLIGHT PREMIERES
Shining a light on new documentary and narrative features receiving their World, North American or US Premieres at SXSW.

Films screening in Spotlight Premieres are:

Audrey the Trainwreck
Director and Screenwriter: Frank V. Ross
Audrey the Trainwreck is a comedy about attempting to keep life simple, and the beauty of such an absurd pursuit. Most men live lives of quiet desperation – Ron’s desperation is about to get loud. Cast: Anthony Baker, Alexi Wasser, Danny Rhodes, Rebecca Spence, Joe Swanberg, Jess Weixler & Nick Offerman (World Premiere)

Cold Weather
Director and Screenwriter: Aaron Katz
A former forensic science major and avid reader of detective fiction, who, after making a mess of his life in Chicago, returns to his hometown of Portland, Oregon. There, he, his sister Gail, and new friend Carlos become embroiled in something unexpected. Cast: Cris Lankenau, Trieste Kelly Dunn (World Premiere)

Hood to Coast
Directors: Christoph Baaden and Marcie Hume (Co-Director)
Hood to Coast follows four unlikely teams on their epic journey to conquer the world’s largest relay race.  Winning isn’t everything in a documentary that takes a celebratory look at personal motivation and attempting the extraordinary. (World Premiere)

Lemmy
Director: Greg Olliver and Wes Orshoski
This documentary delves into the personal and public lives of heavy metal icon and Motörhead frontman Lemmy Kilmister. Nearly three years in the making, and featuring appearances by such friends/peers as Metallica, Dave Grohl, Billy Bob Thornton and pro wrestler Triple H, the film follows Kilmister from his Hollywood bedroom to the hockey arenas of Scandinavia and Russia. (World Premiere)

Man on a Mission
Director: Mike Woolf
Man On A Mission is a feature length documentary that follows gaming millionaire Richard Garriott as he becomes the first second-generation American astronaut. (World Premiere)

One Night in Vegas
Director: Reggie Rock Bythewood
On the evening of 9/7/96, Mike Tyson attempted to regain the WBA title in Vegas. Sitting ringside was his friend Tupac Shakur. This ESPN Films documentary tells not only the story of that infamous night but of their remarkable friendship. (World Premiere)

The People vs. George Lucas
Director: Alexandre O. Philippe
A no-holds-barred cultural examination of the conflicted dynamic between George Lucas and his fans over the past three decades. (World Premiere)

The Ride
Director: Meredith Danluck
A journey into the heart of America through the rough and tumble, rock and roll world of bull-riding cowboys. (World Premiere)

Saturday Night
Director: James Franco
With unprecedented access to the behind the scenes process of the writers, actors and producers, Franco and his crew document what it takes to create one full episode of Saturday Night Live. (World Premiere)

The White Stripes: Under Great White Northern Lights
Director: Emmett Malloy
A visual and emotional feature length film documenting The White Stripes making their way through Canada and culminating with their 10th anniversary show in Nova Scotia. The film documents the band playing shows all over Canada; from local bowling alleys, to city buses, and onward to the legendary Savoy Theater for the 10th-anniversary show.

This year’s eight films were selected from 831 submissions. Each film is a world premiere.

Brotherhood
Director: Will Canon. Screenwriters: Will Canon and Doug Simon
When an initiation ritual spins dangerously out of control, one young man must stand up to save a friend’s life. Cast: Jon Foster, Trevor Morgan, Arlen Escarpeta, Lou Taylor Pucci (World Premiere)

Phillip the Fossil
Director and Screenwriter: Garth Donovan
Centering around an aging party animal chasing the endless summer, Phillip The Fossil is an uncompromising and raw, portrait of everyday people who struggle in all their blemished glory for a life of meaning.
Cast: Brian Hasenfus, Nick Dellarocca, Ann Palica, Angela Pagliarulo, J.R. Killigrew (World Premiere)

Some Days Are Better Than Others
Director and Screenwriter: Matt McCormick
Why do the good times go by so fast while the bad times always seem so sticky?
Cast: Carrie Brownstein, James Mercer, Renee Roman Nose, David Wodehouse (World Premiere)

Tiny Furniture
Director and Screenwriter: Lena Dunham
22-year-old Aura returns home after college to her artist mother’s loft with the following: a useless film theory degree, 357 hits on her YouTube page, and no shoulders to cry on. Starring Dunham and her real-life family, Tiny Furniture is tragicomedy about what does and does not happen when you graduate with no skills, no love life, and a lot of free time. Cast: Lena Dunham, Laurie Simmons, Grace Dunham, David Call, Alex Karpovsky
(World Premiere)

DOCUMENTARY FEATURE COMPETITION
This year’s eight films were selected from 741 submissions. Each film is a world premiere.

Beijing Taxi
Director: Miao Wang
Through a humanistic lens, Beijing Taxi vividly portrays China undergoing a profound transformational arch in an era of Olympic transitions. The intimate lives of three cabbies connect a morphing cityscape and a lyrical journey through fragments of a society riding the bumpy roads to modernization. (World Premiere)

Dirty Pictures
Director: Etienne Sauret
An intimate portrait of the life and work of Dr. Alexander "Sasha" Shulgin, one of the world’s most renowned chemists, who is considered by many to be the "Godfather of Psychedelics." (World Premiere)

For Once In My Life
Directors: Jim Bigham and Mark Moormann
The film takes an inspiring journey with a unique band of musicians with the common goal of making and performing music. Their story tells of the fine balancing act of taking on new challenges while living day-to-day with disabilities. This documentary shows what people can do when given a chance. (World Premiere)

Pelada
Directors: Luke Boughen, Rebekah Fergusson, Gwendolyn Oxenham and Ryan White
Away from the bright lights and manicured fields, there’s another side of soccer. (World Premiere)

Films screening in Emerging Visions are:

11/4/08
Director: Jeff Deutchman
Weaving together footage recorded throughout the world on the day Obama was elected President, this vérité documentary explores how people choose to live through “history.” (World Premiere)

A Different Path
Director: Monteith McCollum
In an automobile dominated society, a cast of characters uses ingenuity and wit to forge a new way to commute. One by foot, one by bike, two by boat. (World Premiere)

American: The Bill Hicks Story (United Kingdom)
Directors: Matt Harlock and Paul Thomas
At last the true life story of the outlaw comic who tried to save the world. Three years in the making, using a stunning new animation technique, American: The Bill Hicks Story finally brings the amazing tale of one of modern culture’s most iconic heroes to the big screen. (North American Premiere)

Bear Nation (Canada)
Director: Malcolm Ingram
What if your biggest perceived flaw became you greatest asset? Bear Nation is a thorough and stylistic examination of the sub culture sweeping gay culture, the sexualization of fat and hair. From the director of small town gay bar and Exec Produced by honorary bear Kevin Smith. (World Premiere)

Cherry
Director and Screenwriter: Jeffrey Fine
A college freshman gets a different kind of education when he falls for an older woman who has returned to school and her teenage daughter develops a crush on him.
Cast: Kyle Gallner, Laura Allen, Britt Robertson (World Premiere)

The Parking Lot Movie
Director: Meghan Eckman and Christopher Hlad (Assistant Director)
“It’s not just a parking lot, it’s a battle with humanity.”  The Parking Lot Movie is a documentary about a singular parking lot in Charlottesville, Virginia. The film follows a select group of Parking Lot Attendants and their strange rite of passage. Something as simple as a parking lot becomes an emotional weigh station for the American Dream. (World Premiere)