Fred Reed said his cosplay hobby began with him making model airplanes with his father when he was a kid. Later, that would turn into full-scale prop replicas while working at a company that made board game miniatures. Soon he was pairing up with his wife to make full-on costumes, dressing up as Perseus and Medusa or as characters from “Futurama.” He was 41 when he started making costumes.

“I’m eager to prove that the old guy can cosplay with the best of them,” Reed says on the first episode of “Cosplay Melee,” a new show on Syfy that hopes to spotlight the art of cosplay — a sometimes intense hobby that involves creating costumes and props based on the creators’ favorite fictional characters, and wearing those costumes to places such as fan conventions. Like Syfy’s similar “Face Off,” which focuses on makeup effects, “Cosplay Melee” sees four contestants compete each week to create costumes that are then judged by a panel of experts, including cosplay model LeeAnna Vamp and “Hunger Games” costume creator Christian Beckman.

“Community’s” Yvette Nicole Brown, who calls herself a “super fan girl,” is hosting.

Each episode follows the contestants as they compete for $10,000. For the first challenge, they’re given time to complete an original accessory (in the first episode it’s a helm). After one contestant is eliminated, the final three have to create full costumes to go along with that accessory. They have just two days to do it.

In a phone interview with TheWrap, Reed, a Bristol, UK native, said his experience on the show ended up becoming a microcosm of a typical convention weekend. There was the crunch to finish your costume at the last minute, crowding into a hotel room — or in this case a workroom — and putting together pieces early before their debut, and working with others to prevent any mishaps.

“It seemed that the vast majority of the time, it was [four] cosplayers working together to finish a costume, not competing for a prize. That was very much secondary,” he said. “It was the ultimate three-day con crunch, with some great friends in the best equipped hotel room on the planet. We had a blast.” 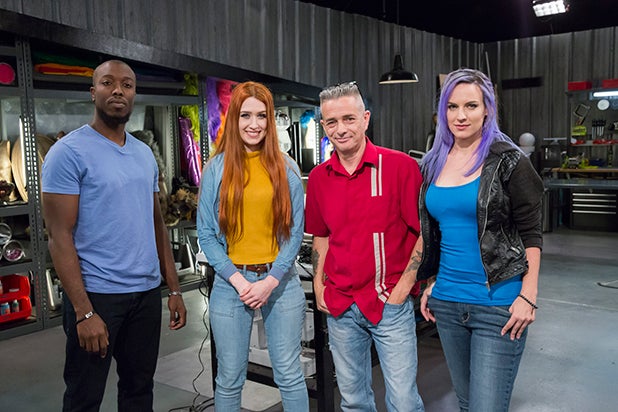 As the other three contestants enter the workroom at the beginning of the episode, they detail what cosplay means to them. For some, it’s a way to break out of their shell. For others, it’s a creative outlet that works in contrast to their day jobs. But for all of them it’s fun.

There are multiple kinds of cosplayers. Some go more casual, either purchasing pre-made costumes or going for characters that are easy to replicate (think Harley Quinn from “Suicide Squad” or anybody living from “The Walking Dead”). Then there are people like Reed and the other contestants, who spend months working on one costume and who can spend hundreds, if not thousands, of dollars working on a piece. He’s constantly wowed by what people can make in their garages, noting how some of it looks like it’s “studio” quality.

The same can be said of the pieces created in this first episode. The contestants have just two days to create an entire costume, and the results are extraordinary. Foam looks like metal, and paint looks like rust. The show pays attention to what each contestant is doing, allowing them to explain their process and get into the finite details of creating things such as fake armor and weaponry. As an audience, you learn about the creators, but there isn’t the drama typical of other reality shows.

“Cosplay is passion, artistry, engineering and theater all rolled into one,” said Heather Olander, senior vice president of alternative development and production at Syfy, who added that cosplay represents “the intersection of the maker world and fandom.”

“Cosplay Melee” hopes to show off these people and their creations, but to also give others at home a glimpse into this world. Reed said while filming, the producers would often check up on the contestants and ask them to explain what they were doing.

“All the time we were filming they were trying to get us to show what we were doing, so it was instructional as well as entertaining. That’s what I wanted it to be more than anything else.”

Check out a preview from Tuesday’s premiere episode, along with some of contestant Fred Reed’s homegrown creations

With its new competition reality show, "Cosplay Melee," Syfy is helping the cosplay subculture -- in which hobbyists make costumes and props based on their favorite fictional characters -- cross over into the mainstream. In each episode, four contestants compete to create costumes for a panel of expert judges, but also to show off their passion to a wide audience. As premiere episode contestant Fred Reed <a href="https://www.thewrap.com/syfy-cosplay-melee-crazy-lifestyle/">explained to TheWrap</a>, it's not really about making the best costume, but learning from your fellow competitors, and engaging with people who love the same thing you do.

"It was the ultimate three-day con crunch, with some great friends in the best equipped hotel room on the planet," Reed says. "We had a blast."

Check out a preview from Tuesday's premiere episode, along with some of Reed's homegrown creations.