A year ago, Sci Fi changed its named to Syfy. Today, apparently, executives at the NBC U-owned cable network lost whatever remaining brain cells they had left. 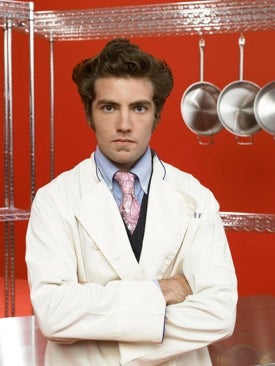 Once known for smart fare such as "Battlestar Galactica," the network Tuesday announced a development slate highlighted by a collection of B-movies Roger Corman would be embarrassed to make (except, of course, for the one he actually is making for Syfy), as well as some new reality shows in development that sound like they were cast off by other networks owned by NBC U.

We are not kidding.

If the show gets greenlit to series, Marcel and his band of made-for-TV caterers will spend an hour creating the menu for events, which could "range from a fairytale graduation party and a Goth-rock fashion show to a ribbon-cutting ceremony for a new subway line," Syfy says.

Bravo might also have greenlit the show called "Face Off," an elimination reality show looking for the next great…makeup artist? (In fairness, these makeup artists do horror films and prosthetics, rather than making models look pretty. Still….)

MoJoe is kind of digging one element of the Syfy reality slate, a potential series from 3 Ball called "The Dome Experiment." It takes a dozen folks and puts them in a sealed bio-environment. Sounds like "Big Brother" meets a Pauly Shore movie. 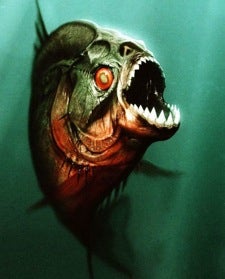 So, naturally, we’re in.

On the longform front, Variety’s On the Air blog is already mocking Syfy’s decision to downscale its audience with movies one would normally find in the bargain bin at Walmart for $2.99.

It’s one thing to get Roger Corman to do his thing, as he is in the previously announced "Sharktopus," starring Eric Roberts. But Syfy’s latest slate of Saturday movies has gone from campy fun to just plain stupid.

In addition to the soon-to-air "Mega Piranha" and "Mothman," Syfy is also moving forward with titles such as "Mongolian Death Worm," "Witchville," "Lake Placid 3" (the last one actually did great ratings), "Stonehenge Apocalypse," "The Lost Future," "Morlocks," "Scream of the Banshee" and "8th Voyage of Sinbad."

In other less disheartening developments, Syfy ordered a fourth season of "Scare Tactics" (Tracy Morgan is now an executive producer, in addition to host) as well as a new companion for "Ghost Hunters" called "Paranormal Investigators" (from BASE Productions).

Syfy has also given a series go-ahead to "Mary Knows Best," in which psychic Mary Occhino — who has a daily show on Sirius — will show off her mommy psychic schtick. It will premiere in July as part of a new Thursday reality block.

About the only thing missing from the Syfy development slate: Supernatural pawn shop owners who bake cakes.

Anyway, sci-fi fans, are we being too hard on the Syfy? Tell us we’re dopes in the comments….