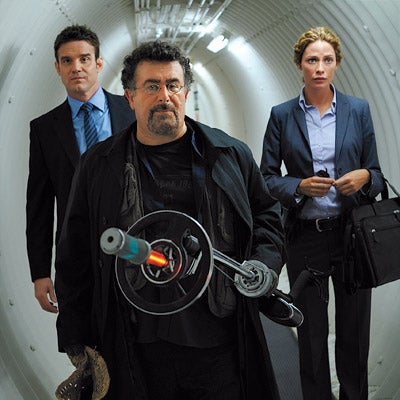 Syfy is bringing together its top-rated scripted series, "Warehouse 13" (left) and "Eureka," for a pair of crossover episodes this summer.

"Warehouse 13" follows two Secret Service agents who are abruptly transferred to a top-secret storage facility in windswept South Dakota that houses every strange artifact, mysterious relic, fantastical object and supernatural souvenir ever collected by the U.S. government (it’s pretty much the place where the Ark of the Covenant ends up at the end of the first Indiana Jones movie). Warehouse caretaker Artie (Saul Rubinek) has agents Pete (Eddie McClintock) and Myka (Joanne Kelly) chase down reports of supernatural and paranormal activity in search of new objects to cache at the Warehouse, as well as helping him to control the Warehouse itself.

"Eureka," meanwhile, is set in what seems like a typical Pacific Northwest town — but it’s actually a secret community of geniuses assembled by the government to conduct top-secret research.

In the crossover episodes, which are currently filming, Douglas Fargo (Neil Grayston) of "Eureka’s" Global Dynamics is sent to Warehouse 13 to help update its aging computer system. This triggers a seemingly sentient computer virus that sends the Warehouse into lockdown and traps the team inside. Rene Auberjonois guest stars in the episode. The "Warehouse 13" episode, "13.1," will premiere at 9 p.m. ET/PT on Tuesday, Aug. 3.

The "Eureka" episode, "Crossing Over," premieres at 9 p.m. on Friday, Aug. 6. It features "Warehouse 13’s" Claudia Donovan (Allison Scagliotti) paying a visit to Eureka, hoping to see some amazing technological wonders. She gets more than she bargained for when seemingly random objects begin appearing around town. Working with Sheriff Carter (Colin Ferguson) and Fargo, Claudia has to help solve the mystery before the strange anomalies have deadly consequences, particularly for newcomer Dr. Grant (James Callis).