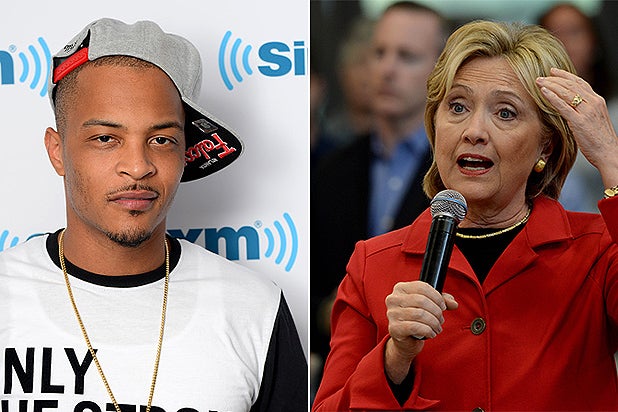 T.I. is on the apology trail after trash-talking Democratic presidential candidate Hillary Clinton.

The rapper, who caught heat Tuesday after saying he would never vote for Clinton because she’s a woman, has now done a mea culpa on Twitter, calling his comments “insensitive and wrong.”

“My comments about women running for president were unequivocally insensitive and wrong. I sincerely apologize to everyone I offended,” the rapper tweeted.

, whose real name is Clifford Harris, raised hackles with comments made during an interview with D.J. Whoo Kid. “Not to be sexist, but I can’t vote for the leader of the free world to be a woman,” said, according to Vibe. “Just because, every other position that exists, I think a woman could do well. But the president? It’s kinda like, I just know that women make rash decisions emotionally — they make very permanent, cemented decisions — and then later, it’s kind of like it didn’t happen, or they didn’t mean for it to happen. And I sure would hate to just set off a nuke.” His comments were met with swift criticism on Twitter.

“As soon as TI started with, ‘not to be sexist…’ ….you knew it was going to be all bad after that,” one commenter said.

Yet another commenter expressed surprise that the convicted felon was discussing the election at all: “LMAO! talked about voting?!”

My comments about women running for president were unequivocally insensitive and wrong. I sincerely apologize to everyone I offended.

T.I. said something stupid about women…well…it is a day that ends in Y so… — Mikki Kendall (@Karnythia) October 13, 2015