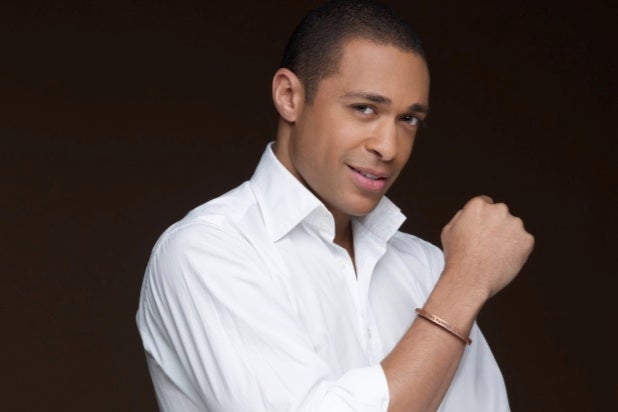 World News Now is ABC’s overnight news program which is directly followed by “America This Morning.”

Holmes was most recently serving as a weekend anchor at MSNBC; before that, he reported and anchored at CNN and HLN, helping the network win two Peabody Awards for coverage of the BP oil spill and presidential elections.

Over his career, he’s covered the 2004 Olympics; the recall election of California Governor Gray Davis that ended up paving the way for the the election of former Governor Arnold Schwarzenegger, and the trials of Scott Peterson and George Zimmerman.

I’m thrilled to announce that
T.J. Holmes is officially joining “America This Morning” and “World News Now” as
co-anchor.  In addition to his anchor duties, he will also report across
our all broadcast and digital platforms.

T.J. has impressed us all for the past few months with his vibrant storytelling, engaging style, and quick wit.

An award-winning journalist, he has reported from around the world on some of the most important stories of our
day.

T.J. was live on the scene following the Virginia Tech campus shootings, the devastating tornados in
Joplin, Missouri, and the Deepwater Horizon oil spill; and in 2009 covered the first presidential debate between then-Senators John McCain and Barack Obama.  His contributions to the coverage of the oil spill and the
Presidential campaigns garnered CNN two prestigious Peabody Awards.

In 2012, T.J. earned an NAACP Image Award nomination for his work as the host of BET’s late-night talk show
“Don’t Sleep,” where he joined distinguished thought leaders and correspondents
to discuss African American interests.

When not in front of a camera, you can find T.J. treating his wife and daughter to some of his mom’s famous
southern cooking.  Born and raised in Arkansas, he is a passionate Razorbacks fan.  Since marrying his wife, who was born in Zaire, in 2010, he has committed countless hours to Africa-related organizations, and has
dedicated himself to learning her native language, Kikongo.

A skilled broadcaster and a dynamic storyteller with the ability to report on a variety of different
stories, I’m confident T.J. will be a strong asset to our team.

Please join me in congratulating him on his new role.