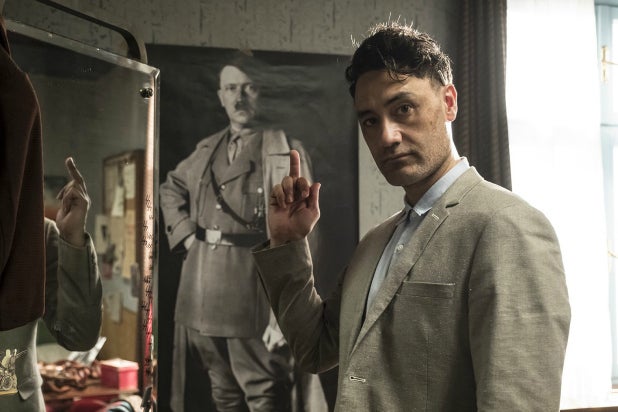 Taika Waititi had no plans to portray Adolf Hitler and the role never factored into his career goals, even as he wrote the screenplay for his critically acclaimed film “Jojo Rabbit,” the filmmaker says.

But Fox Searchlight only agreed to make the movie if Waititi donned the mustache, according to an interview in The Guardian, so he had little choice be to settle into the uncomfortability of portraying the German dictator.

“It just felt uncomfortable,” Waititi told The Guardian. “The clothes were uncomfortable, the glue-on mustache was uncomfortable, and I had to have my hair dyed and straightened, which just made me feel weird all day long.”

In addition to the physical uncomfortableness, Waititi’s portrayal of Hitler is made even edgier by the fact that the “Thor: Ragnarok” director self identifies as a Polynesian Jew.

Week one down of our anti-fuckface satire, Jojo Rabbit. Can't wait to share it with the world. Also, what better way to insult Hitler than having him portrayed by a Polynesian Jew?
???? #FuckYouShitler @jojorabbitmovie @foxsearchlight pic.twitter.com/bNZ2YlDgaF

“Jojo Rabbit” is a black comedy that centers around a 10-year-old German boy in World War II who idolizes Adolf Hitler but is forced to reconsider his ideals when he discovers that his mother is hiding a young Jewish girl in their house. The film premiered at the Toronto International Film Festival, where it won the coveted  Audience Award, an indicator of future Academy Awards success.

The film has been mostly lauded, garnering Golden Globe nominations for best actor and best motion picture, comedy or drama, but it has also offended some who feel the film’s portrayal of Hitler and Nazis isn’t a laughing matter.

Waititi told The Guardian that being dressed as Hitler all day sometimes made set uneasy as well.

“I like to be everyone’s friend as a director, to have a nice familial feel on set, and I’m trying to encourage sharing of ideas and a cool, creative space … but I’m dressed like Hitler. It just changes things, really,” he told the publication. “I would take off the mustache whenever I wasn’t in the scene, and I’d wear a hat, and always take off the jacket because you don’t want to be walking around with a fucking swastika on your arm trying to direct kids.”