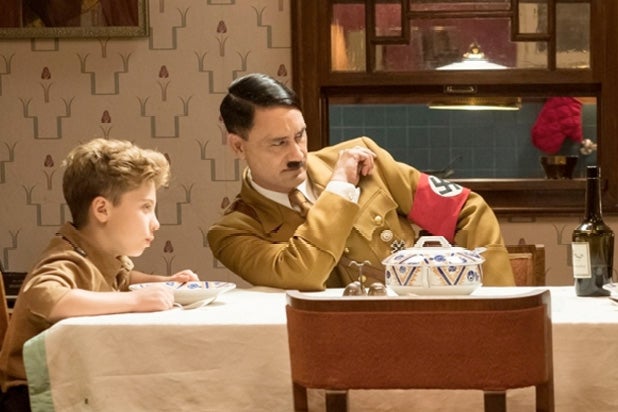 Taika Waititi’s next film, “Jojo Rabbit,” in which the director stars an imaginary version of Adolf Hitler, will be released by Fox Searchlight on Oct. 18, 2019.

“Jojo Rabbit” is Waititi’s follow-up to “Thor: Ragnarok” and “Hunt for the Wilderpeople” before that, and it’s based on the novel “Caging Skies” by Christine Leunens.

Set during World War II, the story follows a lonely German boy (Griffin Davis) whose world view is turned upside down when he discovers that his single mother (Johansson) is hiding a young girl (McKenzie) in their attic. Aided only by his idiotic, imaginary friend, Adolf Hitler (Waititi), Jojo must confront his naive patriotism.

“It’s my version of… a lonely boy’s best version of his hero, which is really his dad,” Waititi told TheWrap in March 2018.

Waititi’s depiction of Hitler isn’t meant as a sympathetic one. Rather, the character is a combination of Jojo’s father and the führer and shows a boy who both misses his dad and is confused by Nazi propaganda around him.

Also Read: What to Expect From Disney's First Earnings Report Since the Mega Fox Deal

Waititi is producing the film with Carthew Neal and Chelsea Winstanley.

“Jojo Rabbit” is one of only three films currently on the release slate from Fox Searchlight and was not among the titles announced when Disney unveiled its overarching release slate through 2027 of both Disney and Fox films. Searchlight’s “Tolkien” just opened this past Friday, and it also has the horror film “Ready or Not” arriving on Aug. 23.