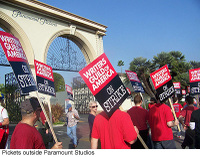 At the PEN USA awards last night in Beverly Hills, it was no surprise to hear a lot of talk about the Hollywood writer’s strike. The theme was the First Amendment (isn’t PEN’s theme always the First Amendment?), and some made strained — even angry — comparisons between the screenwriters’ standoff over money, and the right to free expression.  Several attendees were wearing Writers Guild of America lapel pins in solidarity with the strikers, and the director Garry Marshall, told me he’d been picketing earlier in the day. Zach Helm, accepting the best screenplay award for "Stranger Than Fiction," said: "We are artists, first and foremost. The injustice to our group does not compare to the injustices around the world, but we can all agree that fair is f—ing fair." Still, all was not solid among the attendees. One prominent show-runner at the event, who declined to speak on the record, was fuming, saying that tv writers are among the best paid people in the world and that the math of a strike will never add up. The studios pay millions of dollars a day into the medical and retirement funds of the union, he said, and the loss of that during the strike will never be replaced by monies that may eventually be paid for Internet downloads or other new media. "But I can’t say a word," he fumed. "There’s a big thought police thing going on."  Meanwhile, another event last week showcased a different attitude on the part of management. At the Britannia awards, top executives from Hollywood studios were completely blase on the eve of the strike. "It’s not going to affect us very much," one mogul told me, when I remarked on how relaxed everyone seemed. Another studio chief at the event confirmed that there seems to be little urgency in their ranks to resolve the conflict. With these two parallel Hollywoods in play, the word everywhere is that a strike could go on for a long time. A disheartening thought.