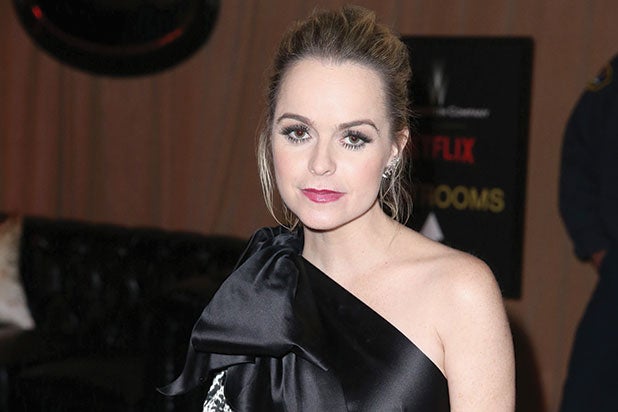 “Orange Is the New Black” star Taryn Manning is tangling with the authorities. Again.

Manning, who plays  Tiffany “Pennsatucky” Doggett on Netflix’s women-behind-bars series, has filed a lawsuit against New York City — yep, all of it — over her arrest in 2014.

In her petition, filed Monday in New York Supreme Court, Manning claims she was wrongfully arrested in Nov. 2014. According to media reports, Manning was arrested for allegedly violating a restraining order by threatening her former roommate Jeanine Heller.

In Monday’s court filings, Manning maintains that she shouldn’t have been arrested, as she was given assurances that she wouldn’t be prosecuted over Heller’s complaint. According to Manning’s filing on Monday, Heller was twice arrested prior to Manning’s arrest for allegedly stalking and harassing the actress.

Manning’s filing maintains that, even though the district attorney’s office told the NYPD that it wouldn’t be prosecuting Manning, she was locked up anyway.

Also Read: 'Orange Is the New Black' Stars Kate Mulgrew, Laura Prepon and Taryn Manning on Season 3: 'Nothing Is Taboo'

While the arrest was eventually voided, Manning’s petition claims, individuals with the NYPD leaked the arrest to the media, “leading to a plethora of press” about the arrest.

“Ms. Manning should never had been arrested where the New York City Police Department received advance notice from the New York County District Attorney’s Office that Ms. Manning would not be prosecuted based on an allegation of the subject complainant,” Manning’s attorney, James Franzetti, said in a statement Monday. “It was also astonishing that the NYPD acted on an allegation of a complainant with a glaring prosecutorial (two arrests, charges including stalking and harassing Ms. Manning) and plea history.”

Last month, Manning was accused of assaulting makeup artist Holly Hartman, who has filed a restraining order against the actress. Hartman cites a number of alleged incidents, during one of which Manning “headbutted my face several times, whipped me with a wet towel, sprayed Windex in my eyes and mouth, put me in headlock cutting off air,” Hartman claims.