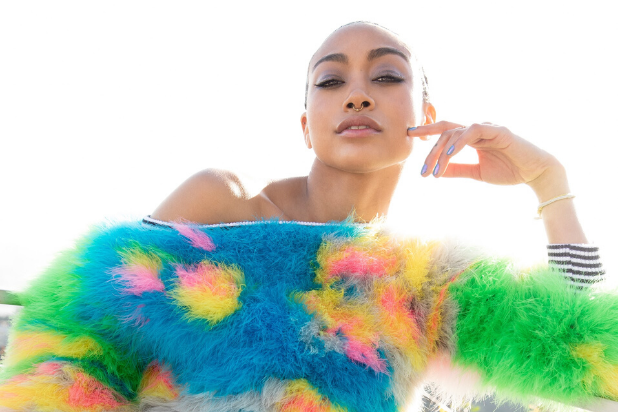 Never judge a book (of spells) by its cover. Exhibit A: Prudence Night from the “Chilling Adventures of Sabrina.” Played by WrapWomen Next-Gen Ambassador Tati Gabrielle, Prudence is the Regina George of the Academy of the Unseen Arts. But don’t be fooled because Prudence may seem like your typical stylish, black magic, spell-faced “hoe”cus pocus, but in reality Gabrielle is so much more than that.

As the show continues and Prudence’s character deepens, we learn more about her family drama and struggle to defend her faith as a witch. Just because it may appear that Prudence has everything going for her, doesn’t mean she’s actually happy. Similar to her character in the show, it’s easy to assume that Gabrielle has the “perfect” life because she’s a successful actress. But actually, underneath it all, she’s fighting her own personal battles and struggles like everyone else.

During a recent interview with WrapWomen, Gabrielle opens up about her history with anxiety and depression and fighting for equal representation in Hollywood.

How does being in the spotlight affect your mental health?

Being in the “spotlight,” on one hand, has been a beautiful experience. To know that there are so many people in the world who support and believe in me is uplifting and motivating. Just the same, being able to touch, serve and inspire so many people is incredibly gratifying.

On the other hand, unfortunately, it’s also been extremely hard for me. I have a history with anxiety and depression. Having so many eyes on me while still being young, developing my own identity and trying to understand myself can be starkly overwhelming and anxiety inducing. I strive to be unapologetically myself as much as I can.

Sometimes, however, I struggle to stay true to myself conflicted over the fear of being a disappointment, judged or just straight up completely misunderstood. In those moments though, I try to remind myself of the bigger picture. I’m doing all of this not just because I love to create, but because I want to use my platform to serve the world in any way I can. Basically, while sort of counterintuitive, it helps to make it all bigger than myself, stepping outside to look in.

What are your thoughts on representation in Hollywood?

To put it simply, I think we’ve made great strides, but still have a long way to go. I am grateful to be coming up in an era where there is an emergence of not only more roles of color, but also more STORIES of color.

I do feel though that it’s still this token thing – the fact that the world got so excited and ramped up about “Crazy Rich Asians” is beautiful, but it shouldn’t have to be that way. What I mean is, an entirely Asian story about Asian people reaching the mainstream film market shouldn’t be a shock to us. Art to me is supposed to reflect life and reality. You can’t reflect reality accurately if you refuse to respectfully include the people and stories that make up the majority of our population. That’s the “minorities.” The people of color.

What advice do you have for younger audiences who look up to you?

Never let anyone tell you who you are or what you are capable of. I don’t care who they are! Your parents, your teachers, your idol, WHOEVER. Nobody knows you better than YOU. How can they? Anything anyone ever tells you about yourself is opinion based, an observation. Not to say they aren’t right sometimes, but when you hear “You can’t…” or “You won’t…” or “That’s impossible” when it comes to your dreams and aspirations, challenge the hell out of it. Because at the end of the day, nothing is impossible. History has proven that over and over again. There is no one else in this world quite like you. Just because someone else couldn’t do it or it’s never been tried before, just means that that it’s meant just for you, it’s been waiting for you to come along. Be unapologetically yourself and I promise you, only good things will come. The world needs YOU. Why else would you be here?