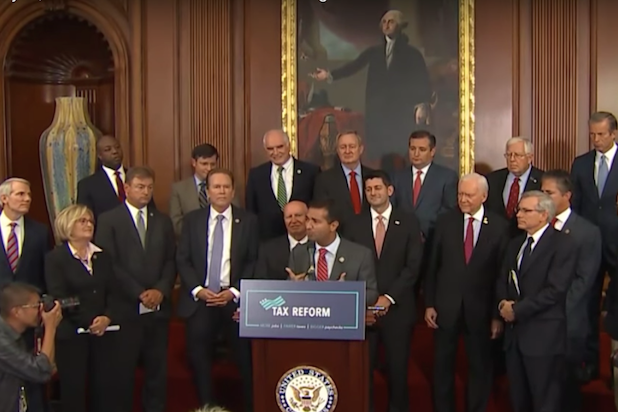 House Republicans declared victory after passing their long awaited final tax reform package on Tuesday. The measure passed comfortably in the House of Representatives on a mostly party-line vote.

However, the victory celebration had to be postponed after the Senate parliamentarian ruled that two provisions in the bill violated the procedural rules of reconciliation. The provisions will be removed from the Senate version of the bill, then kicked back to the house for a final vote, likely held Wednesday.

The final version faces a slightly less certain future in the Senate, but the bill is widely expected to pass and make it to President Donald Trump’s desk for his signature before Christmas.

While Republicans cheered, liberals on Twitter sang a very different song, decrying the bill as a giveaway to the rich, fiscally irresponsible and perhaps even the end of democracy itself.

We no longer live in a democracy when our representatives don't give a damn about the desires and needs of the public, only of their donors. #TaxScamBill2017

Majorities in both houses, the presidency and the Supreme Court, and the best the GOP can do is strip #healthcare from children and give #taxcuts to rich people. A morally bankrupt party.#TaxCutsandJobsAct

Keep in mind that most of the people about to vote for the #TaxCutsandJobsAct claim to believe in a savior who would never – not on his worst day – approve of what this bill does to the poor.

Dear @PressSec: You don't serve in Congress. I do. And I can say with absolute certainty that you are lying. https://t.co/PGGMhnRVzr

.@LindseyGrahamSC literally ran away from us, afraid. This is emblematic of the entire #GOPtaxscam. Graham was afraid of seeing our humanity, because if Graham allowed himself to see our humanity, he would have to vote no on the #TaxCutsandJobsAct #VoteNoVoteNo. https://t.co/xmltEBs50A

In a year, the best thing the GOP could do is take away healthcare from people, end healthcare for children and help themselves, the wealthy profit off the backs of every day citizens and the poorest of citizens. An evil, morally bankrupt party. #TaxCutsandJobsAct

.@SenBobCorker-You’re just another pathetic Republican millionaire who was bought & sold by Trump. When the tax break language was added that would benefit you, you changed your vote to yes. There was no other reason for you to do so. #CorkerKickback will forever be your legacy.