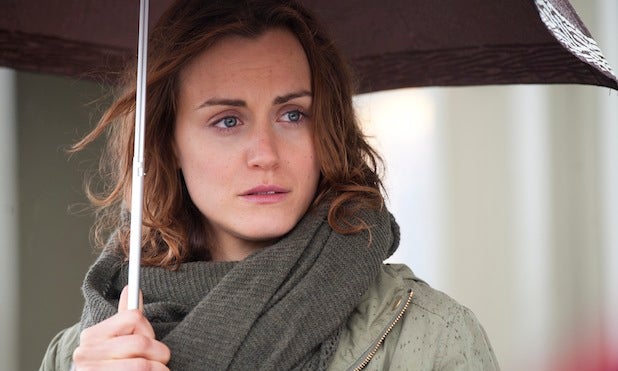 “Stay,” which recently made its world premiere at the Toronto International Film Festival, is based on Aislinn Hunter’s novel of the same name. Gravitas will release the movie in theaters and on VOD in the first quarter of 2014.

Story charts the course of a relationship between a young woman (Schilling) and a disgraced middle-aged professor (Quinn). The couple’s relationship is upended by an unexpected pregnancy, which forces both characters to confront the tumult of their respective pasts.

“Wiebke von Carolsfeld has captured the beauty and complexity of coastal Ireland living. We look forward to sharing the intimate performances of Aidan Quinn and Taylor Schilling which will no doubt resonate with theatrical and video on demand audiences in the United States,” said Nolan Gallagher, CEO of Gravitas Ventures.

“I am thrilled that ‘Stay’ has found distribution in the US,” said director Wiebke von Carolsfeld. “Making character-driven films has always been an uphill battle so being given access to a wide range of audiences through theatrical and digital distribution is a huge boon. Gravitas is building a much needed bridge between independent films and the consumer.”

The film is a co-production between Ireland and Canada that was filmed in Connemara and Montreal last summer, and financially supported by Telefilm Canada, SODEC, and the Irish Film Board.

The deal for “Stay” was negotiated by Gravitas’ Gallagher and Visit Films’ Ryan Kampe on behalf of the filmmakers. Visit Films will also be shopping foreign rights at AFM.