Taylor Swift quickly flashed the centerfold of her upcoming rerecorded “Red” album on TikTok, revealing the lyrics to a 10-minute version of her heartbreaking ballad “All Too Well” – and crazed Swifties freaked out.

In the video, Swift sits cross-legged in a leather armchair, promoting the vinyl version of her rerecorded version of the “Red” album, pulling out discs and — at the end — holding up the inside of the cover, which contains writing on the left half and a photo of her at the piano on the right half.

The captions read, “Give us the 10 minute version of All Too Well,” “& the handwritten lyrics :),” Make vinyl that’s ready by Nov. 12” and “4 discs to fit 30 songs.” The video is set to a loop of a song with the words “I understood the assignment.” 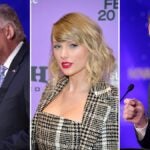 “Red (Taylor’s Version)” comes out Nov. 12, but that is not soon enough for the millions of her devoted (and impatient) fans.

“Me pretending to be a lampshade in Taylor Swift’s house so I can take a look at the lyrics to the 10 minute version of All Too Well when she sleeps,” one fan wrote.

And some desperate Twitter users even began scrambling to somehow get the lyrics of “All Too Well” written on the inside of the vinyl cover, and some are counting the days until the release, which is not coming soon enough for them.

But what it really boils down to for most Swifties is the emotional impact of her songs, especially one like “All Too Well.”

Other fans will wait for the song, but they’re not sure they’ll survive its emotional impact.