Taylor Swift might have kicked off her “Reputation” tour by ending one feud, but it looks like her entire aesthetic for the show is based on another.

Before getting to the music, Swift gave her audience in Glendale, Ariz. a speech about online bullies that indirectly called out Kim Kardashian West.

The pop star went on to say that by featuring snakes in her show, she “wanted to send a message to you guys that if someone uses name calling to bully you on social media and even if a lot of people jump on board with it, that doesn’t have to beat you. It can strengthen you instead.”

And lean into the snake motif she did. Take a look for yourself: 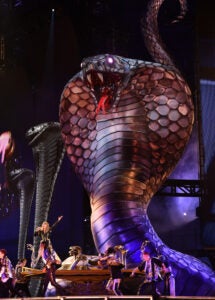 Back in 2016, Kardashian West posted a Snapchat video sharing that Swift gave Kanye West the go-ahead to use her name in his song “Famous,” even though after the song dropped her rep said that she did not approve. In the video posted by Kardashian West, you can hear Kanye reading her the lyrics. Later, the reality star posted on Twitter saying, “Wait it’s legit National Snake Day?!?!?They have holidays for everybody, I mean everything these days!” along with several snake emojis, which many people online interpreted to be about Swift.

On Tuesday night, Swift added that she’s learned a lesson from all this feuding.

“I learned a really important lesson that I’ve been telling you from the stage for ten years but I haven’t been able to learn myself, which has to do with how much you value your reputation,” she said. “And I think the lesson is that you shouldn’t care so much if you feel misunderstood by a lot of people who don’t know you, as long as you feel understood by the people who do know you, the people who show up for you, and the people who see you as a human being. So thank you, thank you, thank you for taking the time to get to know me, for sticking up for me, for seeing me as human being.”

The show ended with that idea, the words “And in the death of her reputation she felt truly alive” cast on the screen.

"And in the death of her reputation she felt truly alive." – The end of the show #repTourGlendale (@lifesaverswift) pic.twitter.com/XikMV95SJj