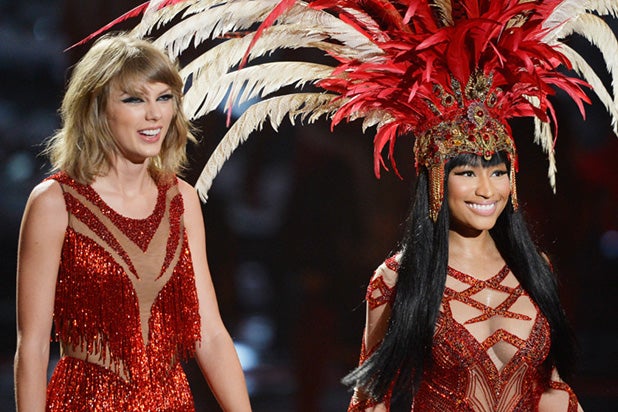 Taylor Swift and Nicki Minaj officially put an end to their feud at the 2015 MTV Video Music Awards on Sunday.

Minaj, who had previously been announced as a performer, opened the show with her song “Trini Dem Girls” before transitioning into “The Night Is Still Young.” Swift surprised the audience when she joined the rapper on stage, and the duo began a brief performance of Swift’s single “Bad Blood.”

The surprise team-up brought the entire crowd to its feet.

Last month, Minaj took to Twitter to complain about the VMA nominees, saying that her video for “Anaconda” had been snubbed.

“When the ‘other’ girls drop a video that breaks records and impacts culture they get that nomination,” Minaj complained, suggesting that she’d been snubbed because of her race and body type.

Swift perceived Minaj’s comment as a personal attack and accused Minaj of using social media “to pit women against each other.”

The two later publicly apologized to each other after the rapper clarified that she wasn’t targeting Swift specifically with her comments.

.@NICKIMINAJ just killed it opening the #VMAs and so did her special guest! http://t.co/Xpl2djiKQ4