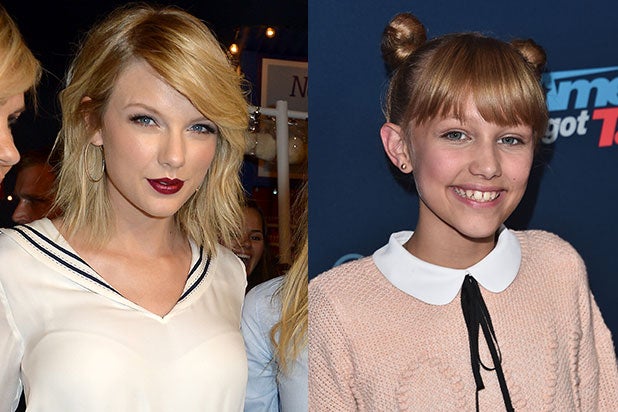 Taylor Swift sent “America’s Got Talent” winner Grace VanderWaal a special gift after she was showered with praise during the finale on Wednesday night.

On Friday, VanderWaal posted a reaction video to Twitter in which she received a beautiful bouquet from the “Bad Blood” singer. Her face shows her utter disbelief before she starts screaming Swift’s name.

“Words can not [sic] explain how honored I am for this,” wrote VanderWaal. “Thank. You. SOOOOOOO MUCH!!!”

VanderWaal stunned audiences during her first audition with her incredible singing chops and ukulele skills, earning her the Golden Buzzer from judge Howie Mandel. Simon Cowell told her she would be “the next Taylor Swift.” During her second performance, Mandel said she could be “bigger than Taylor Swift. I predict you are the biggest star to ever come out of this show.”

“The most amazing thing about Grace is that you haven’t heard anybody who sounds like her,” Mandel said when she was crowned the winner. “You haven’t heard any lyrics from somebody that is like her, and we’ve been saying to her, you are the most unique, brightest star to come out of one of these shows.”

Fellow judge Heidi Klum also joined in on the celebration.

The show, hosted by Nick Cannon, has remained a major summer ratings powerhouse during its 11th season.

Words can not explain how honored I am for this.. thank. You. SOOOOOOO MUCH!!!! @taylorswift13 pic.twitter.com/KwcvIwGtpq