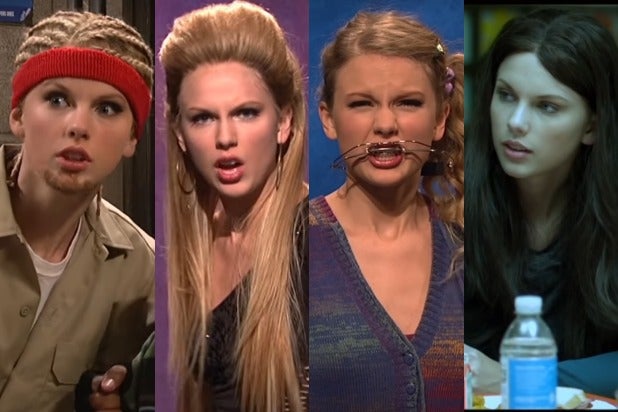 “Saturday Night Live” has given Taylor Swift the opportunity to show off her comedic skills, and she has knocked it out of the park time after time. Check it out.

“Roomies” — A romantic evening on the sofa, watching television with his girlfriend (Nasim Pedrad) is what Bennett (Andy Samberg) hoped for. And all was going planned… until her roomie (the bestest BFF in the universe) showed up.

“SNL Digital Short: Firelight” — Talk about beauty and the beast! In this “Twilight” spoof, Swift’s teen girl falls for Phillip Frank (Bill Hader), a new guy at school who has green skin… and bolts in his neck.

“Scared Straight: Lorenzo and Skeet Devlin” – Swift and Kenan Thompson play ex-cons from the Scared Straight program who try to scare kids busted for joyriding by using plots from “The Sound of Music,” “Top Gun” and “Back to the Future.”

“Save Broadway” – Notable Broadway theater characters put their heads together to come up with a way to combat falling ticket sales. Swift plays Annie, to Bobby Moynihan’s Bustopher Jones from “Cats” and Bill Hader’s Professor Harold Hill from “The Music Man.”

“Penelope: Man and Wife” – Penelope (Kristen Wiig) ruins a wedding reception with her butt-ins, compulsive lies and one-upmanship, ann0ying everyone in attendance, including the guests, played Swift and Andy Samberg.