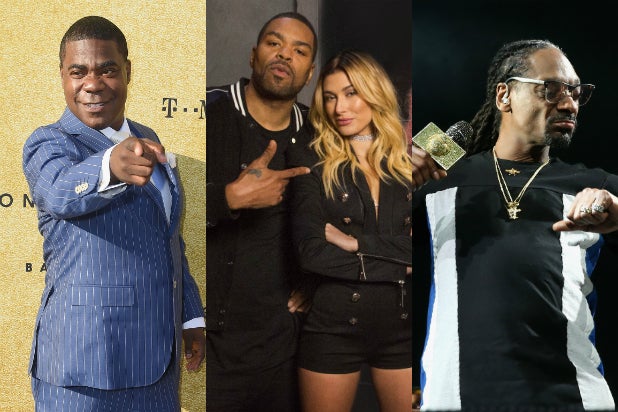 TBS announced its fall slate Thursday at TCA, ushering in three new series and a returning original comedy along with a total 15 original series.

One of its biggest new series is “The Last O.G.,” which will mark the television return of Tracy Morgan. It’s executive produced by Jordan Peele and John Carcieri and co-stars “Girls Trip” stand-out Tiffany Haddish and Cedric the Entertainer.

“Drop the Mic” is based off the James Corden segment of the same name, where celebrities face off in a rap battle. Some team-ups this season include Chris Jericho vs. Laila Ali, Michael Bennett vs. Vanessa Hudgens, James Corden vs. Nicole Richie, Jesse Tyler Ferguson vs. Chrissy Metz, and many others.

Snoop Dogg also is bringing back his favorite game show “The Joker’s Wild,” set in his own casino.

Finally, TBS is premiering Season 2 of the comedy “Search Party.”

“Last year, we broke away from the confines of traditional comedy series and pushed ourselves in new direction with six fresh and distinctive series that were unlike anything else on television,” said Brett Weitz, executive vice president of original programming for TBS, in a statement. “We’re hopeful to score another success with ‘The Last O.G.,’ challenge ourselves with a pair of exciting competition series and catch up with our favorite New York millennials from ‘Search Party’ before heading into a packed 2018.”

The network also announced that “Angie Tribeca,” the police procedural comedy starring Rashida Jones, was renewed for a fourth season with Bobby Canavale (“Boardwalk Empire”) set to join the cast.

You can check out the official series descriptions below.

“The Last O.G.”
“The Last O.G.” centers on Tray (Morgan), an ex-con who is shocked to see just how much the world has changed when he is released from prison for good behavior after a 15-year stint. Returning to his newly gentrified Brooklyn neighborhood, he discovers that his former girlfriend, Shay (Tiffany Haddish), has married an affable, successful white man (Ryan Gaul) who is helping raise the twins (Taylor Mosby & Dante Hoagland) Tray never knew existed. Wanting nothing more than to connect with his kids, but having neither the money to support them nor himself, Tray falls back on the skills he learned in prison to make ends meet while treading unfamiliar territory.

“The Last O.G.” also stars Cedric the Entertainer as the head of the halfway house where Tray is staying, and Allen Maldonado as Tray’s cousin Bobby, who helps him adjust to life on the outside. Executive-producing with Morgan, Peele and Carcieri are Eric Tannenbaum, Kim Tannenbaum and Joel Zadak of Principato Young.

“Drop the Mic”
Celebrities are getting ready to put their battle rapping skills to the test in TBS’s new series “Drop the Mic.” The comedic music competition, hosted by Method Man and Hailey Baldwin, is based on the enormously popular segment from the Emmy-winning series “The Late Late Show.” James Corden, Ben Winston and Jensen Karp serve as executive producers, with Joanna Gallagher as co-executive producer.

Each week on “Drop the Mic,” four stars from the worlds of entertainment, music, sports and pop culture will face off against each other in a rap battle royale packed with “I can’t believe they just said that” moments. At the end of each head-to-head battle, the studio audience will vote to pick the winner.

“Snoop Dogg Presents The Joker’s Wild”
TBS is teaming up with entertainment icon and actor Snoop Dogg to refresh and update a classic game show, with “Snoop Dogg Presents The Jokers Wild.” Snoop Dogg, who counted “The Joker’s Wild” as his favorite game show growing up, will host TBS’s new version, which is set in his very own casino, complete with a gigantic slot machine, as well as giant dice and playing cards. Streetwise questions and problem solving, not just book smarts, will rule the floor, with all the action controlled by the one and only Snoop D-O Double G.

“Search Party”
Last year, TBS’s “Search Party” broke the sitcom mold with its serio-comic story of a group of self-absorbed 20-somethings who become entangled in a mystery as they tried to track down a former college classmate who went missing. Alia Shawkat, John Early, Meredith Hagner, John Reynolds and Brandon Micheal Hall star in the series, which was hailed as one of the best new shows of 2016, with a 100% Certified Fresh rating on Rotten Tomatoes.