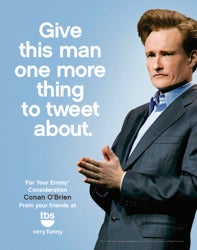 TBS is launching an Emmy "for your consideration" campaign in support of Conan O'Brien's show — on NBC.

Doing what the peacock would not, TBS ponied up for a series of Emmy ads for O'Brien-hosted version of "The Tonight Show" exactly five months to the day before the premiere of his new show on the cable network.

Conan left NBC in January when the network asked him to move "Tonight" to 12:05 to make way for the return of Jay Leno in a late-night slot.

Both the Conan and Leno "Tonight Shows" could get nods from voters in the "Oustanding Variety, Music or Comedy Series" category setting the two rivals up for a potential Emmy showdown.

Because of his contract situation, Conan isn't starting his new late-night show on TBS until Nov. 8, so TBS has no chance at an Emmy here — but its execs obviously are hoping to capitalize on the attention surrounding their new star.

The network is betting big on Conan this year: TBS made Conan the focus of its presentation at upfronts last month and is trying to sell ads on his show for Leno-style prices. So far, media buyers aren't biting. We'll see if this latest promotional campaign has any impact.