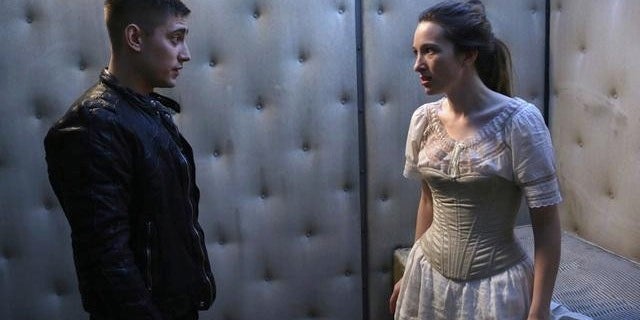 It's a fascinating question, actually. Young Alice follows a white rabbit down his hole and experiences an utterly ridiculous and dangerous adventure in the Lewis Carroll books and the Disney movie.

"We all know what happened to her in the book, she was this amazing character," "Once Upon a Time in Wonderland" executive producer Zack Estrin said at Sunday's Television Critics Association press tour.

"As writers, we're all very curious about what happened to that girl. Once she grew up, how did those adventures in the book formulate this amazing, strong woman you meet in the series?"

See video: Comic-Con Quickie: 'Once Upon a Time' Gets Peter Pan, Tinkerbell and … Ariel?

Whether a result of ABC greenlighting only 13 episodes in its initial series order or simply fueled by their desire to answer the question above, the producers say Season 1 of the show is meant to stand alone.

"What we're planning to do is tell a complete tale, beginning, middle and end, finish it," executive producer Edward Kitsis said. "If people like it, hopefully we'll come back and tell another adventure with this cast."

"Once Upon a Time in Wonderland" finds Alice (Sophie Lowe) in an insane asylum after years of being persecuted for stories she told of a wonderous and dangerous land she visited as a young girl. It finds her somehow returning to bring back proof to her doubting father that her tales are real. She'll meet and fall in love with genie, Cyrus (Peter Gadiot). And the Knave of Hearts (Michael Socha) will arrive from Storybrooke to help her. Though, we find out very quickly that Alice has picked up some self defense skills over the years.

"Yeah, she's tough mentally and physically," Lowe said. "She can kick ass and look after herself."

If you're wondering how this series fits into the mythology on its predecessor, "Once Upon a Time," the producers have it all figured out. "Wonderland" runs concurrently with the other series. Don't be fooled by the Victorian English setting on the spinoff, it's just another story world like we've seen many times on "Once Upon a Time."