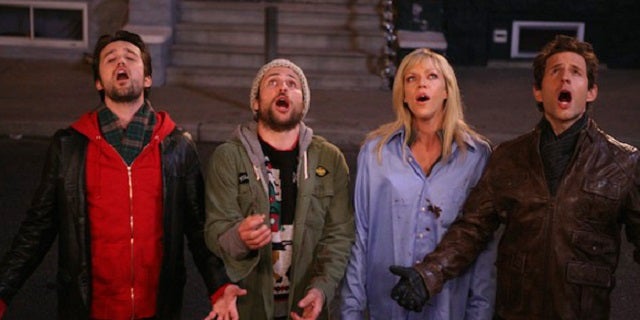 Watch out, Television Academy; the "It's Always Sunny in Philadelphia gang has noticed the lack of Emmy love you've sent their way, and they're going to  allude to the chilly relationship in an upcoming episode.

During the Television Critics Association press tour on Friday, series star Charlie Day revealed details of an episode called "The Gang Desperately  Tries to Win an Award," during which Day and his cohorts realize that their bar, Paddy's Pub, has never won an award.

"They go to these other bars to try to figure out what they're doing that they're not doing, and then try to change themselves to fit in that formula. It doesn't go so well," Day noted.

"Sunny" star Glenn Howerton revealed that the series will also air a special Thanksgiving episode in the upcoming ninth season — during which the gang invites all their enemies over to dinner, in an effort to bury the numerous hatchets — and an episode in which the gang makes "Lethal Weapon 6," hearkening back to an earlier season, when they made "Lethal Weapon 5."

Prior to the panel, a clip from an upcoming episode, "Gun Fever," during which Dee and Dennis Reynolds attempt to buy an assault weapon in an attempt to prove how easy it is, while Frank Reynolds spouts alarmist rhetoric about the erosion of Second Amendment rights on television.

Spoof episode aside, the "Sunny" panel — which also included Rob McElhenney, Kaitlin Olson and Danny DeVito — didn't seem particularly broken up that they've never won an Emmy, or even been nominated in a significant category. (The series has been nominated for stunt work this year.)

"It's like, Gary Oldman still hasn't won an Academy Award," Howerton said. "Do you want to compare us to Gary Oldman? The Gary Oldman of shows?"

McElhenney suggested that the lack of recognition for the Emmys stems from the fact that the show was "off the radar" during its first few seasons.

The series, which premieres Sept. 4 on FX's new offshoot network FXX, has been renewed for a 10t season, and it's 100th episode will air this fall. At one point during the panel, talked turned to how long the show could keep up its momentum. The cast noted that it's "not for sure" that the series will wrap with its 10th season and suggested that there would be no shortage of ideas should it continue.

"I don't think we will run out of insane things to do," Day said.

"The world gives us great material every year," Olson added.