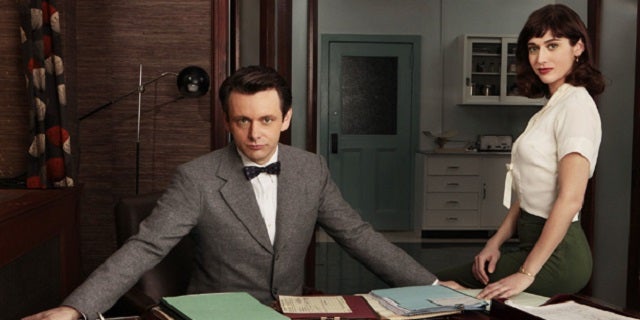 For Michael Sheen and Lizzy Caplan, sex is a laughing matter, as long as it's done right.

The laughing, that is.

Sheen and Caplan, who play pioneering sex researches William Masters and Virginia Johnson in the Showtime series "Masters of Sex" — premiering Sept. 29 — appeared with their castmates and the show's executive producers at the Television Critics Association press tour on Tuesday to discuss the new show — and the delicate art of mining laughs from intimate acts.

Moments of levity aside, Sheen emphasized the importance of maintaining a straightforward and comforting mood on set during the sex scenes (and there appear to be quite a few of them, based on a preview of the series shown at the panel). Especially for the sake of the guest stars.

"The utmost important thing is that everyone needs to feel comfortable and safe. If there's any gray area, that's gonna be a problem. So we knew very early on that you have to be very, very clear that directors have to speak to actors … We want people to keep coming into this show and taking those risks … not just nudity, but emotional risks, subject matter, what we're investing in it."

Not that Sheen appears to have difficulty dealing with graphic content on the show. Since they began filming the series, the actor notes, he and Caplan have become quite at ease with the material. Perhaps too at ease, in Sheen's case.