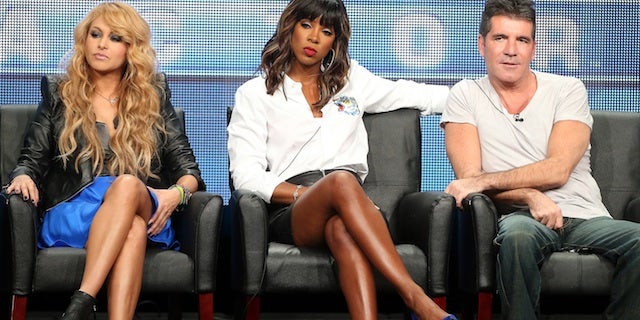 The central question in these days of floundering television talent shows is whether finding and creating stars is a requirement for success.

For years, Fox's "American Idol" has generated one star after another, including Kelly Clarkson, Carrie Underwood, Jennifer Hudson, Jordyn Sparks and Adam Lambert. As TV's biggest and longest-standing singing competition, it set the standard.

Earlier this week, NBC's "The Voice" coach Adam Levine said finding a star wasn't the show's goal or a measure of its success. "The X Factor's" Simon Cowell disagrees.

"No show can survive without that," he said during Thursday's Television Critics Association press tour. "You're making a promise to the contestants that you're going to turn them into a real life artist when the show finishes. It's not a guarantee, but that is your commitment. Otherwise, it's just a gameshow."

He points to One Direction as an example of stars created by "The X Factor UK." And this past season, the American show was able to create stars from two of its groups, girl group Fifth Harmony and surfer boys Emblem 3 — neither them of them actually won the competition, but they still count in Cowell's opinion.

To that end, Cowell and the show's producers cast "The X Factor UK" judge Kelly Rowland and Latin pop star Paulina Rubio in the seats vacated by Britney Spears and L.A. Reid. The criteria for their selections?

"How passionate are you about doing this job properly? And actually trying to find a star? That was the whole process," Cowell explained.

Returning judge, Demi Lovato added later: "Some shows may say it's not about creating a pop star, but we want to help these people break out in the industry — whether they win or not."

Aside from the new judges, Cowell confirmed that the $5 million prize is no more — now at $1 million, admitting the initial number was meant to create buzz and didn't seem appropriate anymore.

And when he was asked if he would return to "American Idol" if "The X Factor" is canceled after this season, he said he refused to imagine either scenario.

"Somebody well known once told me to know when to leave the fair," he said.