Can a pair of reboots reboot the stagnating box office?

The good news this weekend: Awareness levels for the new films coming is really high.

Unfortunately for Fox and Sony, which are readying the Friday launches of “The A-Team” and “The Karate Kid,” respectively, moviegoing has been softer than a cup of Jackie Chan’s ramen noodles.

In fact, the domestic box office is down about 4 percent year-to-year for the first five weeks of the summer season. Naturally, distribution executives are a little skittish.

“A few weeks ago, I would have been a lot more bullish,” conceded a Fox official, predicting a $30 million-$35 million opening for “A-Team,” a $95 million remake of Stephen J. Cannell’s iconic ’80s NBC soldier-of-fortune-themed series. 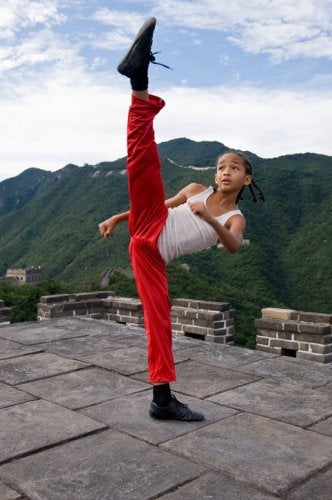 The PG-13-rated film will be locked in a close competition for the No. 1 slot with Sony’s remake of the 1984 Ralph Macchio/Pat Morita school-bully-payback classic “Karate Kid.”

Produced in China for $40 million, and also expected to start out in the $30 million-$35 million range, “Kid” stars Jaden Smith as a Beijing transplant who struggles with local bullies … before a kung fu guru with a dark past (Chan) teaches him how to kick people in the face.

The film, which is garnering a respectable 59 percent fresh rating on Rotten Tomatoes, garnered a PG rating from the Motion Picture Association of America, despite some tough-to-watch, somewhat realistic scenes of Smith’s young character getting beat up.

For its part, “A-Team” is scoring in the 51 percent range on Rotten Tomatoes.

Both “A-Team” and “Karate Kid” likely will surpass DreamWorks Animation’s 3D film “Shrek Forever After,” which despite an overall lower-than-previous-franchise-installments performance has led the domestic box office the last three weeks.

Factoring in its steady week-to-week declines of around 40 percent, the fourth “Shrek” likely will finish third in North America, the last weekend before Disney’s 3D “Toy Story 3” takes away much of its exhibition.

Other holdovers factoring in this weekend include Universal’s “Get Him to the Greek” and Lionsgate’s “Killers.” Both comedies grossed in the upper teens last weekend.

Meanwhile, among indies debuting this weekend, Roadside Attractions’ "Winter’s Bone," which won the Sundance Grand Jury Prize in January, will start out in four locations.