If you’re rolling with a tech-heavy investment strategy, maybe it’s best you don’t take a look at your portfolio on Tuesday afternoon.

A red day on Wall Street was punctuated by major drops from the FANG stocks — Facebook, Amazon, Netflix, and Google — with the tech giants combining for their worst performance in three years.

Netflix “led” the way, with a 6.14 percent slide on Tuesday, falling to about $301 per share. Facebook’s recent skid continued as well, dropping nearly 5 percent to $152.22 a share on the day. The social network was already battered heading into Tuesday, after falling more than 13 percent last week in the aftermath of the Cambridge Analytica data leak revelation. CEO Mark Zuckerberg will testify to Congress on the matter in the coming weeks, CNN reported early on Tuesday. 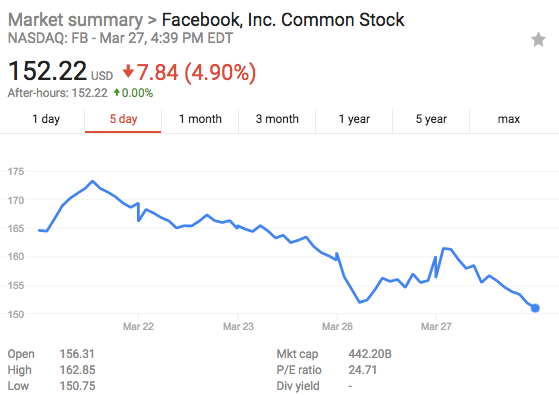 The tech losses highlighted the pain investors felt across the market, with the Dow Jones, S&P 500, and Nasdaq all falling more than 1.4 percent, respectively.  One day after President Trump tweeted his approval of the third biggest points jump in Dow history, the index fell more than 300 points on Tuesday.

The biggest tech flop, however, came outside the FANG foursome: Twitter was rocked, cratering 12 percent to about $28 per share after Citron Research said it was betting the stock would fall.