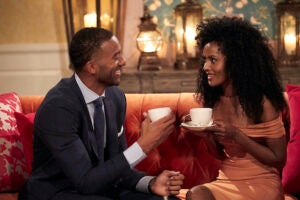 Big Tech has made some big decisions of late. But those decisions could ultimately make the lives of Amazon and other tech firms “miserable” from an antitrust perspective, according to Alex Kantrowitz, author of the Big Technology newsletter.

Facebook last week “indefinitely” suspended President Trump and Twitter went a step further, banning him forever from its service, following the attack on the U.S. Capitol by scores of the president’s supporters. Soon after, Google and Apple both pulled Parler, a social media app popular among conservatives and used by some of the rioters, from their app stores; while Amazon yanked Parler’s web hosting services, pushing the platform completely offline on Monday and Tuesday.

While these are private companies that are able to moderate content however they want, the legal grounds for their actions may be in danger — especially when it comes to effectively shutting down Parler. If a handful of tech giants are essentially allowed to decide whether a competing service lives or dies, both lawmakers and regulators could have extra ammo when it comes to arguing that these companies wield monopoly power over the social media space.

That’s already a popular stance in Washington, D.C. Only a few months ago, the House Judiciary subcommittee on antitrust said the tech world’s “Big Four” — Apple, Amazon, Facebook and Google — enjoy “monopoly power” over their competitors. The report, spearheaded by a Democratic majority, recommended that Congress change current antitrust laws to better account for the digital world, with the aim of breaking up the tech giants into smaller companies. Now, that recommendation likely picked up more GOP support following the latest round of crackdowns.

That means we could be primed for an unprecedented number of antitrust battles between Silicon Valley and Washington over the next few years. That potential regulatory blowback was just one of the topics Kantrowitz and Sean Burch, TheWrap’s tech reporter, discussed on the latest episode of Tech Talk.

Here’s a taste of Sean and Alex’s discussion on whether the last week strengthened the government’s monopoly argument. Be sure to watch the full episode to hear discussion about Trump’s social media ban, whether it was a step in the right direction — or not — for online discourse, and whether a change could be coming to Section 230, the legal shield that allows tech companies to moderate content as they see fit.

Also Read: Leaders of the SPAC: Why Hollywood Is Hot for Blank-Check Companies

Sean: There’s an argument to be made that the government’s claim that the “Big 4” have “monopoly power” has been reinforced by the actions of these companies over the last few days. What do you think?

I’m going to break it down in terms of what’s happened: What we saw over the past four years was a big move toward antitrust, largely pushed by Democrats. You did have the Federal Trade Commission and Justice Department bring lawsuits against Facebook and Google while Trump is in office. But the most sophisticated interrogation of these companies and their business models has been led by Democrats in the House Judiciary Subcommittee on Antitrust. And what sparked Democrats to action is they became upset after the 2016 election, believing Big Tech had delivered the election to Donald Trump.

So now, you have Democrats who are already enthusiastic about antitrust action, and they’re about to be joined, in a big way, by Republicans who have seen what has gone on over the past week. They’re going to be pissed and want to bring action, too. And it won’t just be Facebook and Google. It’s going to be Amazon, and it’s going to be Apple. Those moves with (Amazon Web Services) and the App Store are really going to have some downstream effects that I think the companies must’ve been prepared for. But that’s coming. I expect to see continued bipartisan antitrust pressure placed on these companies, whether that’s in the form of new legislation, that actually allows regulators to (target) their business models head-on, as opposed to now, where we have these roundabout monopoly maintenance cases. Or it’ll be pressure to regulators to take more extreme action than what’s happened so far.

If you’re an antitrust defense lawyer, you’re going to have work for the next four or five years, because these companies are only going to end up spending more and more time defending themselves from antitrust accusations, and that’s going to be one of the major stories we see around the tech giants as we move forward.